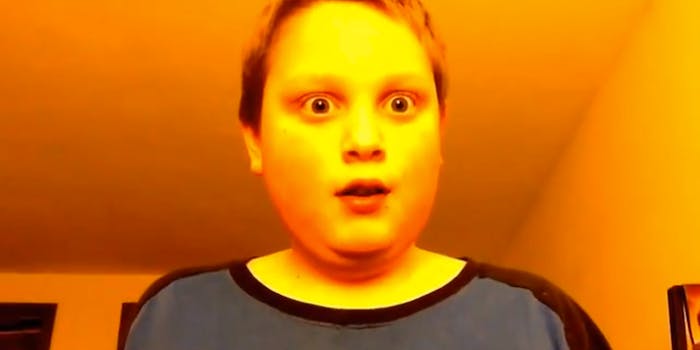 How this awkward kid became an overnight YouTube star

Last night, up-and-coming vlogger Sir Fedora posted a video to his YouTube page. In it, the young man enthusiastically attempts to rally viewers to get the “likes” on his video up from one to between three and five. He’s got modest dreams, and you’ve got to respect that. But Sir Fedora went even further with his plea and attempted to personally connect with his followers, which is the right approach to YouTube:

“We did it; we hit one like. And I know you guys are gonna be like, ‘Dude, it’s just one like.’ But it’s still awesome that I know that you guys are there. … I still think it’s pretty awesome you guys are sticking with it.”

The page, which also includes the name C. Jackson, is only five days old, so the social media-savvy Sir Fedora continued with his plea for subscribers, previewed a new iMovie, and promoted his Twitter. He is genuinely excited about one like, and states that more likes would make him “go through the roof,” then pans the camera to the ceiling, where there’s a substantial hole. “I’ve already gone through the roof,” he says, before breaking into the chorus of “Wrecking Ball.”

By the end of the video, you’ve drank the Kool-Aid: How does this kid not have more likes?

Then Reddit got a whiff of the situation and decided to flood his video with likes. As of this afternoon, the video has more than 400,000 views, and 70,000 likes (as well as 1,000 dislikes). His Twitter follower count ballooned to 12,000. Many redditors commented on the effects of too much fame too fast:

“Oh boy, this is how it starts. A harmless virtual flash mob handing out likes on youtube. Once this shit goes viral, he will get made into memes and get featured on morning talk shows. Everyone will have a laugh. Then BOOM! Under a bridge doing heroin.”

Others commented on the infectious charm of his videos:

“I’m sitting here thinking this kid is just rambling on about nothing, and then BOOM, I’ve watched the whole video. He’s actually rather entertaining to watch.”

And others wondered if Sir Fedora might actually be the original poster, and this was all a ploy for likes. But if his enthusiasm isn’t genuine, what is real in this world? For what it’s worth, Sir Fedora seems to be aware of his Reddit hit, and he tweeted at his new followers to stay with him.

He posted a new video today, ostensibly about a whipped cream challenge, but it freezes at around the 30-second mark. Sir Fedora’s going through the growing pains any new YouTuber faces, but he just got a bunch of new fans. In the end, he just wants to know you’re watching.