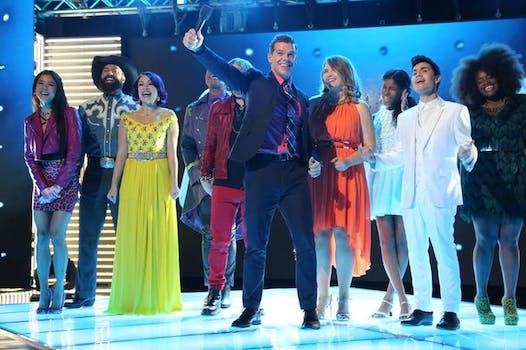 ‘Sing It!’ skewers the middling world of reality singing competitions

For reality TV, what’s behind the camera is often as compelling as what’s in front. To wit: YouTube Red’s newest series, Sing It!, takes a fictional look at the messy world of a musical competition desperate for a comeback.

It’s an increasingly familiar setup. Last year Lifetime’s UnReal mined the genre of dating shows to the tune of a Peabody Award.

Sing It! approaches vocal competition shows in a landscape where American Idol, the grandfather of the genre, just signed off the air for good. The 10-part series was created by the Fine Brothers, who’ve mastered the art of reactionary content with their lauded React brand. Now they’re jumping into a longform comedic setting in partnership with YouTube Red.

“It was mostly shot at the YouTube Space,” says actor Sam Tsui who stars as talented Icelandic singer Magnus. “It was awesome to be on the big stage and see it totally transformed into this very convincing set. The fact that it’s a show-within-a-show narrative device means that it being on a soundstage lends it some credibility in shooting. It felt very unique.”

Tsui doesn’t have his own experience with being in front of the camera on a reality competition show, but he has had opportunity to work behind the scenes thanks to his YouTube stardom, working for The Sing Off! on the same season that fellow YouTubers Pentatonix rose to prominence.

“Even though I consider myself lucky that I never had to go through the process of being in one of those shows, I have had the ability to see the process,” he says. “[Sing It! is] obviously a heightened version of the crazy antics and drama, but there’s definitely truth to the fact that even though when you’re watching all you see is the performers, there’s so much going on with producers and rights to songs.”

The show will follow some reality elements, with each episode saying goodbye to a character and the two finalists getting a real vote by the fans to determine the season 1 winner. While some performers on the show play characters with dubious levels of talent, Tsui says he’s lucky to play a role that reads like the person his 2.4 million YouTube fans have grown to love.

“Every character has a different quirk and gimmick, luckily my character gets to be a good singer,” he says. “I don’t want to spoil anything, but each character has unique challenges. Mine are not in the singing department.”

The first episode kicks off with the longtime producer getting fired and subsequently urinating on camera lenses in protest. Mircea Monroe plays expectant replacement Stacey, who’s blindsided by the hiring of idealistic executive Drew, played by Mark Sullivan. There are self-centered judges played by Debby Ryan and Alex Desert, a sexually ambiguous and hoverboard-riding host played by Preston Jones, and a spirited stage manager played by Laura Harrison.

The first four episodes of Sing It! are available immediately to YouTube Red subscribers, with additional episodes premiering in June.