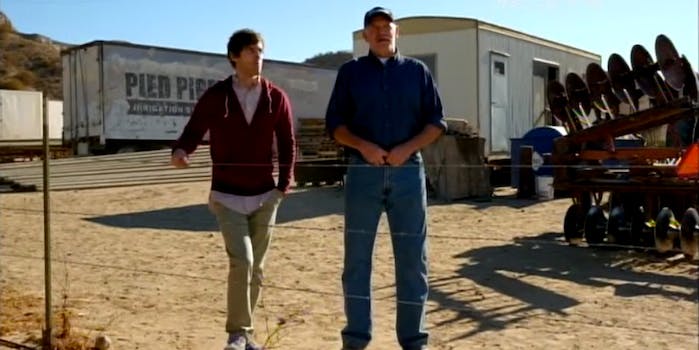 When we hear the origin stories of successful businesses, they’ve usually congealed into a myth, with heroes, villains, betrayals, and triumphs. Alexander Graham Bell beckoning Watson and changing the world. Jobs and Woz tinkering in a garage. What must be messy, shambling, failure-dotted struggles get polished into legends.

I don’t know whether Mike Judge intends the Silicon Valley crew to succeed or fail, but these early episodes are providing a backstory so shaggy it’ll be interesting to see how Erlich, Richard, and the rest of the Pied Piper crew recast it as romantic as the seasons progress.

Silicon Valley’s third episode, “Articles of Incorporation,” opens with the carefully chosen images of a company intent on polishing its reputation as an empire: the Taj Mahal, the Pyramids, and other titanic human-hewn wonders. No, the motley Pied Piper crew isn’t going on a grand tour. It’s a commercial from Gavin Belson, spewing his tech-can-save-the-world ad-babble with aplomb. “If we can make your audio and video files smaller, we can make cancer smaller. And hunger. And AIDS,” he intones.

Belson is talking about Nucleus, Hooli’s new project (and direct ripoff of Pied Piper.) Richard doesn’t think they have much to worry about. But he also still thinks that “Pied Piper” is a good name for a startup. Gilfoyle and Dinesh point out that inferior products win out all the time if they beat competitors to market.

Richard has bigger problems than his stupid choice in name. Or, rather, his stupid choice in name is a bigger problem than everyone thought: the startup is broken, and the $200,000 check eccentric billionaire Peter Gregory gave them is made out to Pied Piper, Inc. Only problem: Pied Piper, Inc. is already the name of a California irrigation company.

Everyone wants Richard to change the name. Erlich suggests a vision quest to find a new one. Other house developments include the revelation that Gilfoyle is a Canadian living illegally in the U.S., Dinesh is annoyed because everyone assumes he’s there illegaly, but he’s a citizen. Gilfoyle utters the marvelously delusional line, “Your borders are merely a construct. I prefer to think of myself as a citizen of the world.”

Peter Gregory isn’t thinking about Pied Piper, or any of his other investments. While desperate investees show up asking for additional funding, Gregory ignores their plight and becomes fixated on Burger King. Scenes with Gregory elevate Silicon Valley; the role could’ve been a broad caricature of Peter Thiel and the idea of the super-eccentric mega-rich tech titan, but Christopher Evan Welch makes Gregory’s tics and obsessions so specifically his that the satire never feels tired, even when it is obvious. Welch’s enormous success with the role makes it all the more heartbreaking that he died last December. Welch was a successful working actor, but not a household name, and he is so great as Gregory that it’s hard not to dwell on what we’re missing out on. Welch’s pronunciation of “Burger King” is perfectly weird, and he gives Gregory a fizzing, sharp energy that makes him the most interesting character in any given scene.

Richard convinces Arnold, the cantankerous Pied Piper guy, to sell him the name for $1,000, mainly because Arnold is a tech-hating crank who doesn’t understand the company’s potential/thinks Richard has Asperger’s. To celebrate, he buys a Margarita machine from BevMo! and encounters an obnoxious sales guy desperate to pitch his new app. Silicon Valley is doing a good job of showing how startup culture and promise, however remote, of potential vast wealth affects even people removed from the industry who live in the area. Like Richard’s app-obsessed doctor from the premiere, the sales guy has Valley aspirations. It reminds me of the trope that everyone in Hollywood has a screenplay in a drawer or a locked-up ambition to act; it seems everyone around the Valley has an app idea at ready.

The celebration is short-lived, since Arnold reads an interview with Erlich that makes Pied Piper sound like a huge company. He decides to up the price to $250,000.

Richard freaks out about changing the name, prompting Erlich to give him the kind of pep talk that only Erlich would find inspiring. Richard despairs that he has no experience. “Neither did Zuckerberg when he was running Facebook at 19. You think he had any real-world business experience? No! None! But he was such a tough negotiator that now all of his friends are suing him. How awesome is that? And Steve Jobs just took a shit ton of hallucinogens,” he says, genuinely trying to help. Erlich decides to go on a vision quest for the new name himself.

Richard bucks up and decides to confront Arnold to honor his handshake deal over the phone. His brief display of bravado turns into a crisis when Arnold decides to come beat him up.

The situation diffuses when Arnold arrives at the ramshackle Pied Piper headquarters and realizes what a mess the startup is. The sequence reminds me of the time I went to a fancy-seeming startup’s headquarters only to discover a room full of folding chairs and empty tallboy beer cans piled in the corner. Many of these fledgling companies are controlled by young dudes who can build a beautiful product but don’t have the funds or drive to create a professional (or, really, sanitary) office environment. Richard gets his name, which is good, because Erlich’s vision quest is an utter failure.

Meanwhile, it turns out Peter Gregory’s inexplicable preoccupation with Burger King did have a practical component: He surmises that sesame seeds will be affected by a blight, and he decides to play the stock market based on his predicted increased demand for sesame seeds. The money he plans to make will keep his investment afloat. It’s a neat reveal that underlines that Gregory’s character is a genius, which bodes well for Richard.

– The commercial at the beginning was funny, but way too corny for a company that’s supposed to be as major as Hooli. -20

– Gilfoyle asks to be paid in cash or Bitcoin. +10

– The liquor store employee’s horrible startup idea for an app to help you remember where you parked your car was exactly bad enough to be realistic. +10

– Erlich’s startup media tour consists of TechCrunch, Recode, and Pando Daily. Kara Swisher gets name-checked. These are exactly the sites a startup like this goes after. (And now I’m imagining how Valleywag would cover Pied Piper.) +50

– You have to pause the show to get a good look, but the list of new names Jared works on is wonderful. Diminishr, Scrunch, Squish, The Squincher, Shrivel, Shriv, Shrvl, Tiny Dancer, The Wee Machine, and Dwarf-It are all suggestions. +100