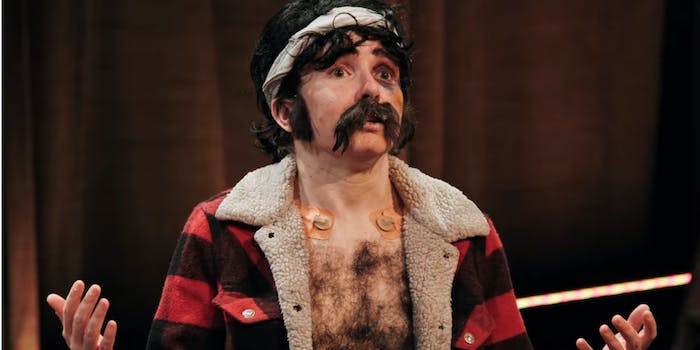 Nate, the hour special from actor Natalie Palamides, comes front-loaded with audience testimonials meant to warn you that what you are about to see is not for the faint of heart, including one from executive producer Amy Poehler. But they sound kind of silly compared to the Nate experience.

RELEASE DATE: Dec. 1, 2020
DIRECTOR: Philip Burgers
STREAMING: Netflix
An exploration of consent that leaves you with more questions than it answers.

It’s better to participate in the world of Nate, Palamides’ titular alter ego, without previews. He makes an over-the-top entrance, riding a miniature motorcycle to a metal song but failing to nail a big spectacle jump over an audience member. Later, he does crowd work with cans of LaCroix.

Audience interaction informs a good portion of the show. Nate is performing—he takes a shower, meets up with his best friend—but also treats the audience as part of the experiment. Early on, Nate approaches a female audience member, hands cupped in a groping motion, slowly moving towards her chest. He stops just short of touching her, then says, “May I?”

That’s where the major theme of the show comes in, and Palamides does a lot with it in just an hour. “All you gotta do is ask,” the recently dumped Nate assures the audience, and himself. He starts out slowly, asking people for consent on touching, but gradually progresses to asking them to do weirder things for (and to) him. I won’t spoil what happens in the second half of Nate, but his alpha-dog posturing—camo cargo pants, a flannel jacket exposing a hairy chest, a black eye—slowly morphs into something more complex. There are men who ignore consent, and men who ask but don’t really understand why—or assume asking is where the responsibility ends.

Nate feels like a caricature and someone familiar. He performs feats of strength, engaging in a battle of masculinity with himself, and the audience. As Palamides told Vulture, clowning is part of her theatrical training, which tempers the character’s idiot nature with something more empathetic, but relies on the audience response to move it forward. (One of the funniest bits includes Nate calling out for his best friend Lucas until someone in the crowd responds.) At the end of the chaotic show, Nate says he hopes his “message was clear,” though it absolutely is not. “The clown is always the optimist,” Palamides told Vulture.

While later portions of the show invite nervous laughter or dead air, Nate doesn’t seem like a bad guy. You’re not rooting against him. But there’s also something to grapple with in that assessment. There’s no resolution at the end of the hour. Nate takes off on his motorcycle, in a cloud of smoke. Now you’re left sitting with the feelings.