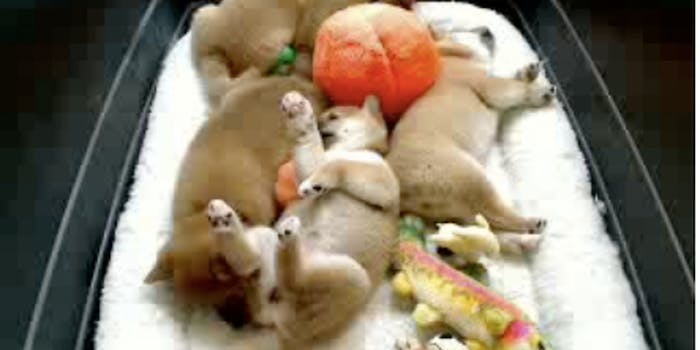 The return of Puppy Cam

This Ustream of a litter of Shiba Inu puppies does what it says on the box.

The Internet may be made of cats, but it’s ruled by puppies. Just ask the San Francisco couple who’ve now presented four litters of Shiba Inu puppies on their world-famous Puppy Cam.

In case you’ve been living in a bunker since 2008, the Puppy Cam is exactly what it says it is: a video camera trained on a basket full of puppies while they sleep, wrestle, eat, play, and attempt to escape. Say it with me now: awwwwwwww!

The Ustream channel currently features the D Team (Teams A, B, and C of course preceded them on-camera in 2008, 2010, and 2011) born on May 21: boys Daichi and Dango, and girls Dosha, Daisuki, and Dakota, the little cream one. Lest you think a video channel consisting of snoozing puppies is no rival to, say, a Zooey Deschanel sitcom, the channel has had 58,609,843 views, and 148,000 Facebook likes and counting. The Puppy Cam has its own Wikipedia page, too. Stoic first-time mom Ayumi hasn’t let it go to her head, and seems to have some difficulty figuring out who these adorable new celebrities are, though she tolerates them well enough.

The owners, who protect their anonymity online, have raised an estimated $20,000 for the Shiba Inu Rescue Resources of America through advertising on their channel and sales of calendars, mousepads, and other merchandise in their related CafePress store. Their page also features a warning about the dangers of puppy mills and advice about how to get a good puppy from an ethical breeder.

Do-goodery and puppies! What are you waiting for? Just click the button!