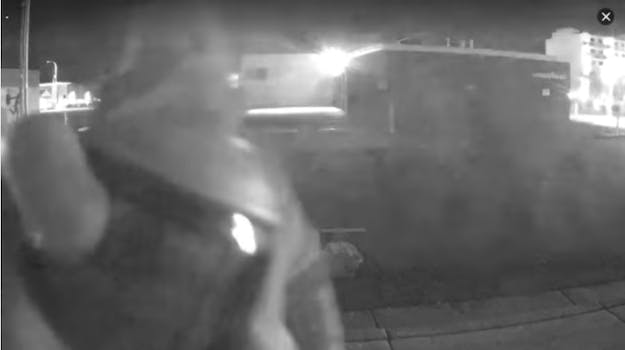 The trolls have arrived.

As it turns out, Shia LaBeouf really can’t catch a break, both on the internet and IRL.

Just days after the anti-Trump livestreaming project, He Will Not Divide Us, was relocated to the El Rey Theater in Albuquerque, New Mexico, the camera was vandalized and covered with a coat of red spray paint overnight.

The vandal appeared briefly around 4:20am MT early Tuesday morning, wearing a mask to hide their identity, TMZ reports. The El Rey Museum began to remove the paint several hours later. As of Tuesday afternoon, the exhibition has been retouched and is back to streaming live.

He Will Not Divide Us was launched by LaBeouf on Inauguration Day in collaboration with artists Nastja Säde Rönkkö and Luke Turner at the Museum of the Moving Image in Queens, New York. It was intended to stay in place for the duration of Trump’s presidency—but after three weeks of violent outbursts and arrests, the exhibit was shut down  at its original location.

LaBeouf himself was arrested and charged last month with misdemeanor assault and a harassment violation after an altercation with a neo-Nazi at the site of the installation.

In an official statement regarding the closure of the installation, the museum cited “serious public safety hazards” and called the exhibit a “flashpoint for violence.”

On Feb. 18, the livestream reopened outside the El Rey Theater.

Tuesday’s vandalism account is the first incident reported at the new location. LaBeouf, Rönkkö, and Turner have not yet provided any commentary since the reopening.