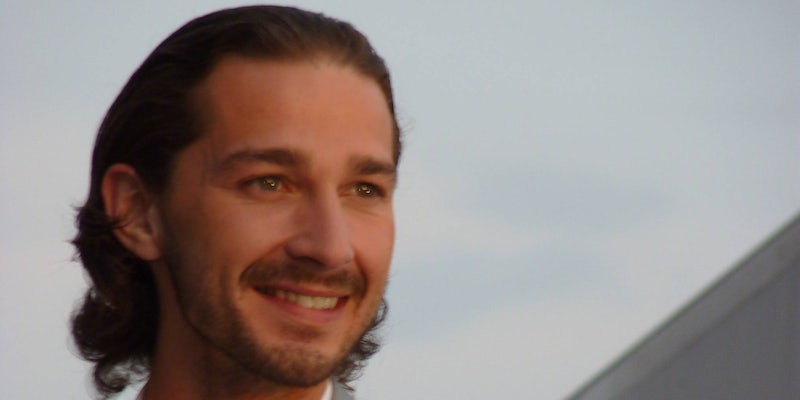 The incident was streamed live on the internet.

After a second political altercation at his anti-Trump art installation, actor Shia LaBeouf has been arrested.

The performance art installation, titled HE WILL NOT DIVIDE US and presented in collaboration with Nastja Säde Rönkkö and Luke Turner, features a livestreaming webcam where members of the public (often accompanied by LaBeouf himself) are invited to recite the phrase “He will not divide us.” It’s already becoming a magnet for neo-nazi counter-protests, with LaBeouf previously clashing with a man who shouted the neo-nazi slogan “1488” into the camera.

LaBeouf was arrested and charged with misdemeanor assault and a harassment violation on Thursday morning, after what CNN describes as a “verbal exchange” with a man who tricked him into posing for a selfie before saying, “Hitler did nothing wrong.”

LaBeouf responded by pushing the man away, and according to NYPD spokesman Sg.t Thomas Antonetti, LaBeouf pulled on the man’s scarf and scratched his face in the process. The arrest took place in front of the webcam and was caught on tape during the livestream.

LaBeouf has already been released and went straight back to the art installation, although that hasn’t stopped fans from lending their support on the #FreeShia hashtag.

Update 11:47am CT, Feb. 6: This article has been updated to include the names of LaBeouf’s collaborators.