The museum says the project is a 'flashpoint for violence.'

A Queens, New York, museum announced Friday that it is shutting down Shia LaBeouf‘s anti-Trump livestreaming project, HE WILL NOT DIVIDE US, citing concerns for public safety.

The decision follows several weeks of violent outbursts at the site of the livestream, located on the side of the Museum of the Moving Image.

“The installation created a serious and ongoing public safety hazard for the museum, its visitors, its staff, local residents and businesses,” the museum said in a statement, according to the New York Post.

Since its opening, the exhibit has been a site of controversy and often violent, politically charged clashes. The livestream’s most disturbing moments were punctuated by late night visits from people in masks and white supremacists relaying neo-Nazi slogans via the livestream. One heated encounter with a man who said “Hitler did nothing wrong” led to LaBeouf’s arrest, and quickly made him a target for harassment online in secret neo-Nazi forums.

LaBeouf launched the project in collaboration with artists Nastja Säde Rönkkö and Luke Turner on Inauguration Day, with plans to continue the livestream throughout President Trump’s time in office.

As of this morning, the livestream has been turned off. The HE WILL NOT DIVIDE US website has been updated to read:

On February 10, 2017, the Museum of the Moving Image abandoned the project. The artists, however, have not. 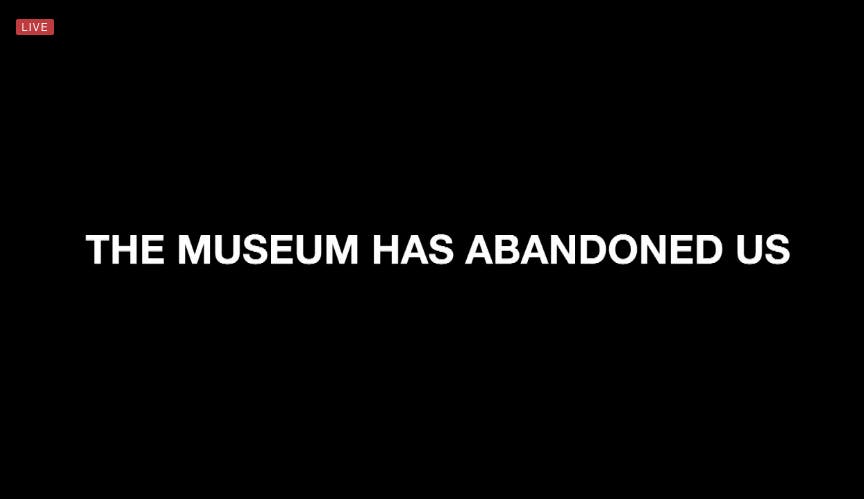 Screengrab via HE WILL NOT DIVIDE US

Aside from a final “He will not divide us” tweet, LaBeouf and his collaborators have not yet released any other public statement.