After taking on a white supremacist at the site of his new anti-Trump art project, Shia LaBeouf is a target for the president’s white nationalist supporters. And neo-Nazis are using secret chatrooms to organize against him.

LaBeouf launched the livestreaming project, HE WILL NOT DIVIDE US, last week at the Museum of the Moving Image in Queens, New York. The exhibit, presented in collaboration with Nastja Säde Rönkkö and Luke Turner, encourages members of the public to chant the mantra, “He will not divide us,” into the camera for as long as they wish.

Since its debut with the first mantra delivered by actor Jaden Smith, the livestream has been wildly successful in drawing large crowds of anti-Trump protesters. It has also garnered the attention of chatrooms affiliated with 4chan. 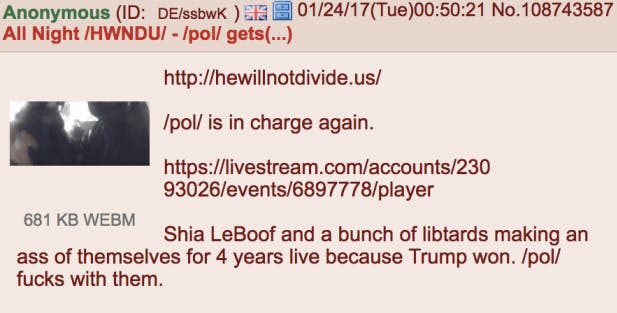 Since Saturday, 4chan’s “Politically Incorrect” message board “/pol/” has been running several threads about the livestream. Most of the threads are dedicated to harassing anti-Trump protesters as they appear on the stream, but others have threatened LaBeouf directly.

Since these threads first appeared last weekend, 4chan and Reddit moderators have been monitoring them as users attempt to organize harassment campaigns. 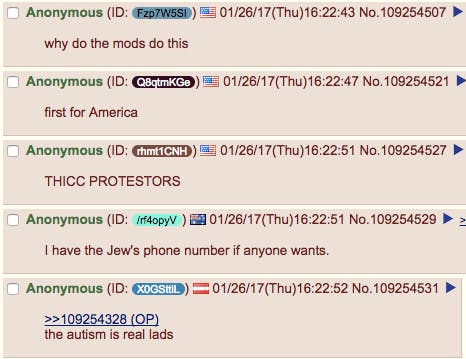 Perhaps the most intense moment captured on the livestream was LaBeouf’s takedown of a white supremacist, who appeared wearing a hat resembling those of Nazi soldiers. 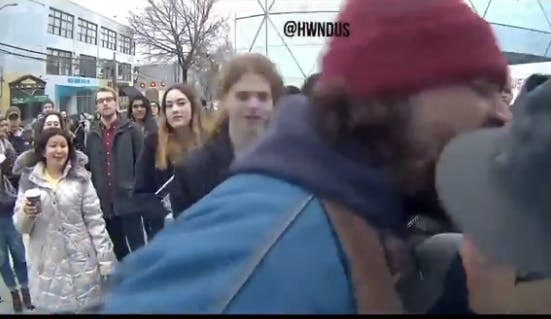 The man joined the chanting crowd and whispered “14, 88,” a set of numbers associated with a neo-Nazi slogan that refers to a phrase often repeated by members of the Aryan Nation. LaBeouf shouted “He will not divide us” repeatedly in the guy’s face until he fled the scene.

LaBeouf was arrested and charged with misdemeanor assault and a harassment violation after a second neo-Nazi encounter Thursday morning, but was released and reappeared shortly at the exhibit.

Recent “threats” have been more like massive (but nonetheless terrifying) group trolls of the livestream itself. Two people in masks and hats showed up in the middle of the night and proceeded to slice up a stuffed animal in front of the camera. 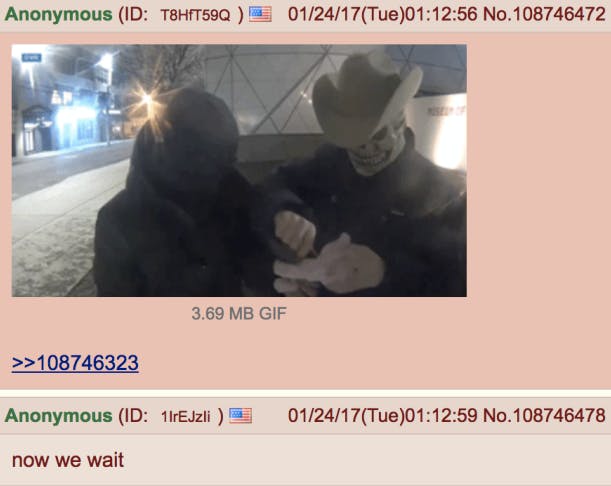 Some people appeared holding images of Pepe the frog, a meme which has become an unofficial mascot of the alt-right, a white supremacist group. Other Trump supporters arrived wearing “Make America Great Again” hats, but remained relatively quiet. 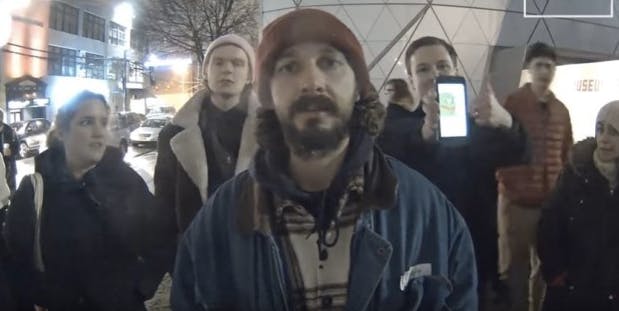 Aside from another moment when LaBeouf briefly intervened with a man in a “Make America Great Again” hat—who is nicknamed “/pol/ Blart” by 4chan users—most of LaBeouf’s interaction with his exhibit has consisted of standing and quietly chanting “He will not divide us,” often by himself. 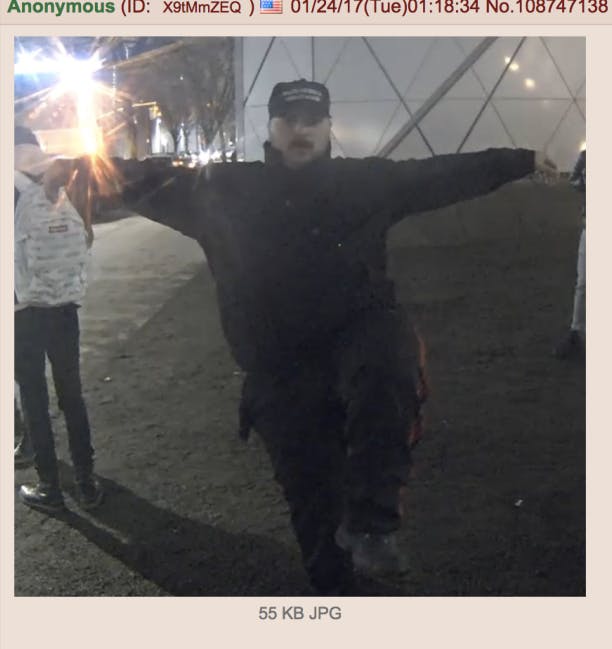 Though no other physical altercations have taken place since, a white supremacist site has appeared, attempting to identify protesters as they appear at the site of the livestream. 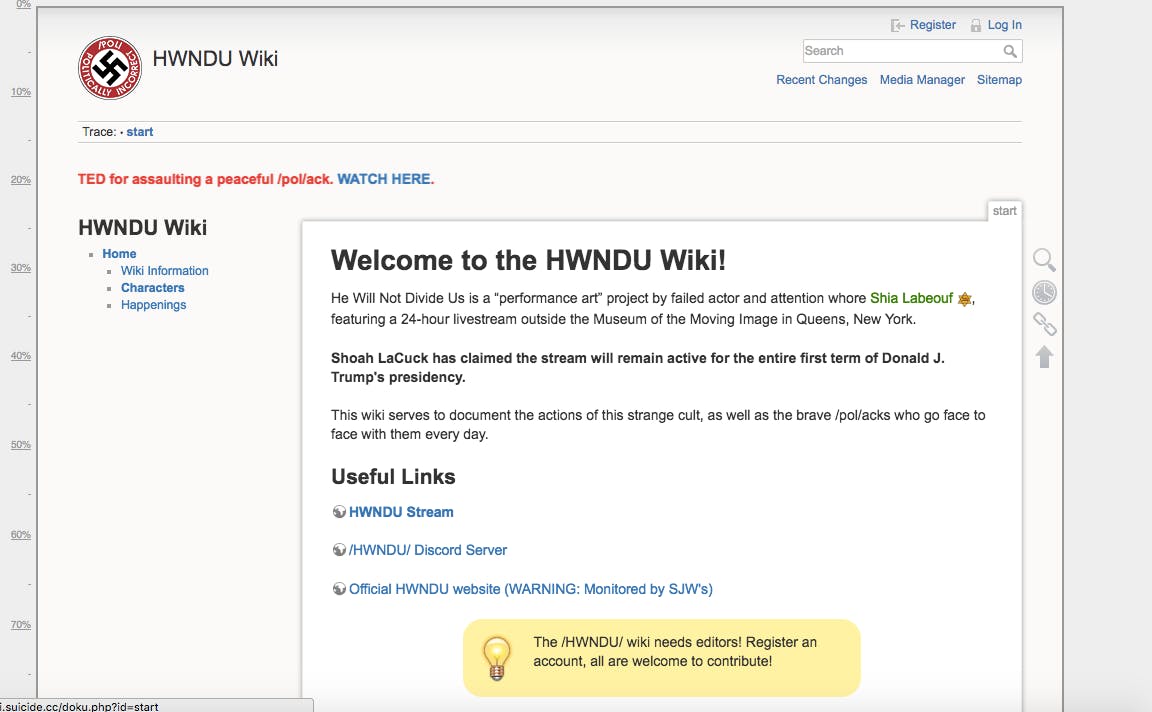 The Daily Dot has reached out to the Museum of the Moving Image for comment on any updated safety measures, and will update this story with their response accordingly.

Update 11:48am CT, Feb. 6: This article has been updated to include the names of LaBeouf’s collaborators.