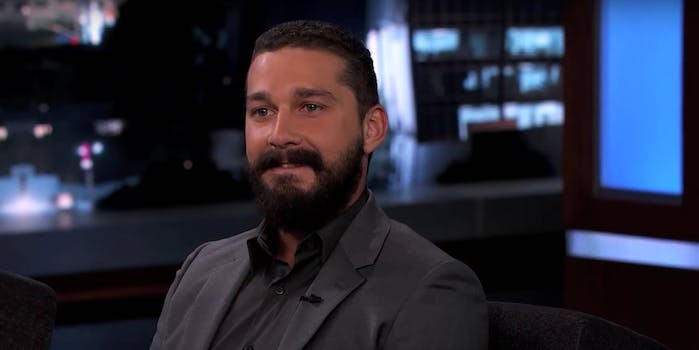 As Donald Trump took the inauguration stage Friday to become president of the United States, Shia LaBeouf took to the web to launch an anti-Trump, four-year-long livestream in protest.

The interactive project titled HE WILL NOT DIVIDE US consists of a webcam placed on an outside wall of New York’s Museum of the Moving Image. LaBeouf’s piece, in collaboration with Nastja Säde Rönkkö and Luke Turner, invites the public to recite the words into the camera in any fashion they choose, where the opportunity is open 24 hours a day, seven days a week. It will be continuously livestreamed throughout the duration of Trump’s presidency.

“The mantra ‘HE WILL NOT DIVIDE US’ acts as a show of resistance or insistence, opposition or optimism, guided by the spirit of each individual participant and the community,” its website reads.

Above the text sits the livestream video, where the chant is initiated by singer and actor Jaden Smith.

Since Jan. 14., LaBeouf has taken Twitter to chant the mantra himself, leading up to the project’s release. 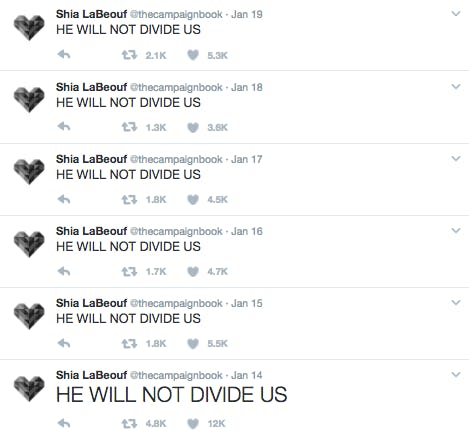 The actor and activist is no stranger to livestreaming. Last year, he camped out alongside Rönkkö and Turner in an Oxford University elevator for 24 hours for his question-and-answer session, #ELEVATE. Other past projects include #TOUCHMYSOUL, #ALLMYMOVIES, and #IAMSORRY.