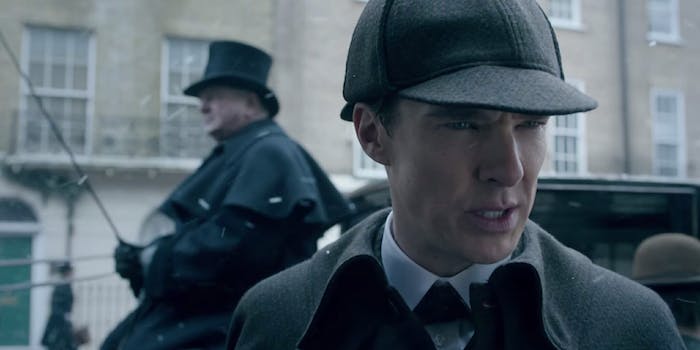 It's here, and it's as Victorian as promised.

The new trailer for the upcoming (and long-awaited) Sherlock holiday special is here, and it’s done nothing to answer our most pressing question:

If a modern AU (alternate universe) of Sherlock Holmes does an episode set in Victorian England, does that make it a regular adaptation again, or an AU of an AU?

The trailer itself boosts the Inception-y vibes, with the gravitas of the soundtrack and the sense that something very urgent and serious is happening, even if we have no idea what that might be.

From this trailer, several things seem to be clear:

Naturally fans latched on to what was really important about the trailer:

And of course there’s the biggest question of all:

Though there’s no confirmed date, it’s most likely the show will air around Christmas. It’s also clear from the lack of specifics that showrunner Steven Moffat and crew are trying to avoid telling us how this one-off special will fit into or impact the show’s fourth series, and the many unanswered questions season 3 left us with.

For now, all we really know is what Moffat has said all along: that season 4 will be much darker than previous seasons—though it’s hard to see how things get much darker than “Sherlock faking his own death and leaving John to mourn for a year beside a wife who ultimately betrays him and tries to kill his best friend”—and that we’ll be waiting a very long time for it.

After season 3 aired in January of 2014, it might have been reasonable to hope to see the fourth season by early 2016. Alas, season 4 won’t even begin filming until next spring, which means it’s probable that its precious three episodes won’t be appearing until January 2017. Such is the pain of the obsessed Sherlockian.

Ah, well—at least we already have plenty of sleuthing as well as plenty of fanart and fanfiction to keep us busy until then, including this newly minted fanart of the new trailer: