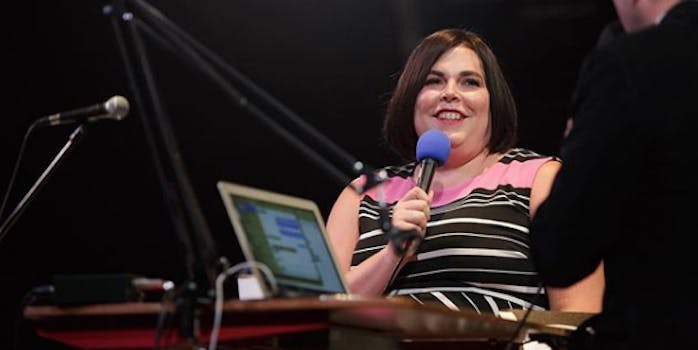 Amazon is in hot water with one of its showrunners this week after the streaming giant asked her to tone down her politics online and even delete tweets.

Shadi Petosky, who created and runs the Amazon original kids’ series Danger & Eggs, says the company asked her to be less politically vocal on Twitter when she was first hired. But after a petition for major streaming services—Amazon especially—to stop hosting the NRA‘s TV network gained viral traction this week in light of the Parkland shooting, Petosky is feeling newly empowered to share her thoughts. Especially since she says that the content in question was about Petosky’s life as a transgender woman.

Early Sunday morning, Petosky revealed via Twitter that her employers had requested she delete certain tweets they found problematic soon after she was first hired in 2015. And now, in light of Amazon’s role in promoting the NRA’s business ventures, she is apparently hoping for equal responsiveness.

“Remember when I started working with you I was asked to curb my politics online and I deleted a bunch of my tweets?” she wrote. “That sucked.”

She added: “Your turn. Drop the politics that are killing kids.”

After fans replied asking for more details, Petosky explained what her experience with Amazon has been like. At the time she was hired, she says, the company told her that her activism was polarizing, “like someone posting pro Trump messages.” And so she deleted some of her political tweets in the spirit of being “a good collaborator.”

But Petosky had tweeted about subjects like the appropriate use of pronouns.

“I forget the tweet,” she said in an interview Tuesday. “But it was something like: Pronouns aren’t that hard, just figure it out.“

Petosky told BuzzFeed she was called into a meeting with Amazon executives Aaron Davidson and Melissa Wolfe, who apparently told her that a potential writer for Danger & Eggs had said she “couldn’t be funny based on a deep-dive of [her] Twitter feed.” The executives also told her not to talk about politics on social media, Petosky said.

Petosky was also the subject of international news in September 2015, after a run-in with the TSA caused her to miss a flight from Orlando to Minneapolis. At the time, the incident drew attention to the demeaning hold-ups trans people are often subjected to during airport security screenings. Petosky’s story went viral after she tweeted about it.

In the days that followed, she said, “I was being very political about the TSA and my experience.” That was what Amazon had asked her to “tone down,” she added.

That sit-down with the executives was in 2016, and the corporation still hasn’t been satisfied with her modified tweeting in the time since then, apparently. Petosky wrote that “after more” requests for deleted tweets from executives over the years, she apparently went to HR where “there was an investigation,” and the company ultimately “apologized for bullying.”

She says the relationship between herself and the higher-ups is still “cold,” and the future of her show “is in limbo,” but she felt moved to do what she could to speak out.

Petosky said she ultimately recounted her experience with Amazon because she felt like there was “a little bit of a connection” between how she was treated and the company’s politics in general.