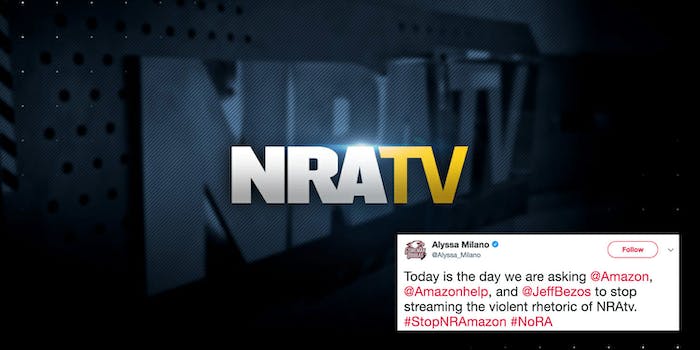 Celebrities are joining the cause.

Celebrities including Alyssa Milano, Misha Collins, and Justine Bateman—as well as other gun control advocates—began using the hashtag #StopNRAmazon on Thursday to demand that Amazon drop the National Rifle Association’s TV service from its platform.

The NRA’s TV service offers both live segments and pre-recorded shows on Amazon around the clock and boasts that it’s “America’s most patriotic team on a mission to take back the truth.” On Friday morning, the website was promoting a segment called, “The Media Love Mass Shootings” as well as coverage from the Conservative Political Action Conference—including a quote that gun rights advocate Wayne Pierre said at the convention.

“Opportunists are exploiting tragedy for political gain,” Pierre’s quote on the site says. “Schools must be the most hardened targets in the country. Evil must be confronted immediately with all force.”

It’s coverage like this, which feels more like propaganda than the “truth” the TV service promises to uncover, that has inspired celebrities to take a stand against NRA TV.

“With @Amazon’s NRAtv propaganda programming, it’s more convenient than ever to get brainwashed by gun lobbyists— right from the comfort of your own home,” Supernatural’s Misha Collins tweeted.

Today is the day we are asking @Amazon, @Amazonhelp, and @JeffBezos to stop streaming the violent rhetoric of NRAtv. #StopNRAmazon #NoRA pic.twitter.com/ds5DAN7evx

With @Amazon's NRAtv propaganda programming, it's more convenient than ever to get brainwashed by gun lobbyists— right from the comfort of your own home. (Change the channel, @JeffBezos!) #StopNRAmazon

Pretty sure I keep Amazon in business. But I'll find another way if @Amazon, @JeffBezos and @AmazonHelp do not stop streaming the vile rhetoric spewed on NRAtv. Our kids are being regularly mowed down like tin cans and the NRA calls it "freedom." F that.#StopNRAmazon

#StopNRAmazon Do you shop on @amazon ? Do you stream from @AmazonStudios We are asking @amazon @AmazonHelp + @JeffBezos to stop streaming the violent rhetoric of NRAtv. Enough of this self interested lobby killing us.

Let’s put some pressure on #amazon and @JeffBezos to stop streaming the filth that @NRATV puts out. #StopNRAmazon

Thank you @FNBOmaha. Your turn @Amazon. Do the right thing, and distance yourself from NRAtv.#StopNRAmazon https://t.co/yflqa12O61

Did you know there is something called NRAtv? And that it's carried by streaming service @amazon?
We'd like to stop them from carrying this gun industry funded misinformation, which adds to gun violence throughout our nation.
Please let @JeffBezos know.
#StopNRAmazon

The hashtag is one of the latest trending discussions about gun control and the NRA’s influence on the government and American culture in the wake of the shooting in Parkland, Florida on Feb. 14.