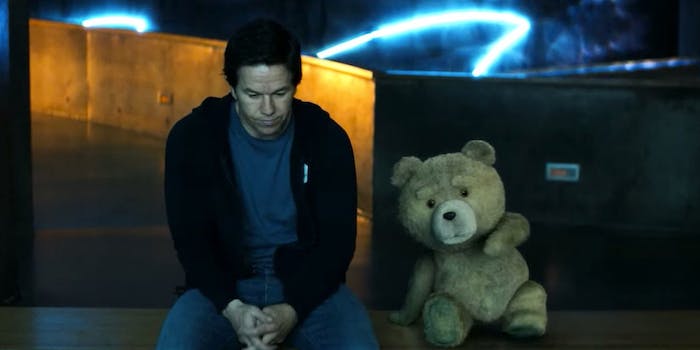 The creators of the series claim that Ted has many qualities in common with their star.

In a move that some will consider akin to taking the credit for small pox, Seth MacFarlane and the studio and producers of his 2012 smash Ted have been accused of making “an unlawful copy” of an (until now) little-seen webseries.

In a lawsuit filed in the U.S. District Court, Los Angeles, Bengal Mangle Productions allege that Ted shares both similar physical attributes and a “vulgar, yet humorous character” with “Charlie,” the feature character in Charlie the Abusive Teddy Bear which was originally exhibited across a slew of streaming sites between July 2009 and November 2010.

According to the complaint:

– Both Charlie and Ted are teddy bears that have come to life in an otherwise human world.

– Both Charlie and Ted use vulgar language, solicit prostitutes, drink alcohol, and use drugs.

– Charlie and Ted each have a substantially similar persona, verbal tone, verbal delivery, dialogue, and attitude.

– Charlie and Ted possess the same physical attributes, including the general look and feel of each character:

– Both Charlie and Ted maintain an active social media  presence, including individual Twitter and Facebook accounts, with similar postings.

With Ted grossing over $550 million at the box office (on a $50 million budget) and the film’s sequel to begin filming this month the timing of this suit seems hardly accidental. And if the makers of Charlie catch even a whiff of success in their endeavours, others like The Bear from Bo’ Selecta! are unlikely to remain unloved in the toybox they’ve been kept all these years.