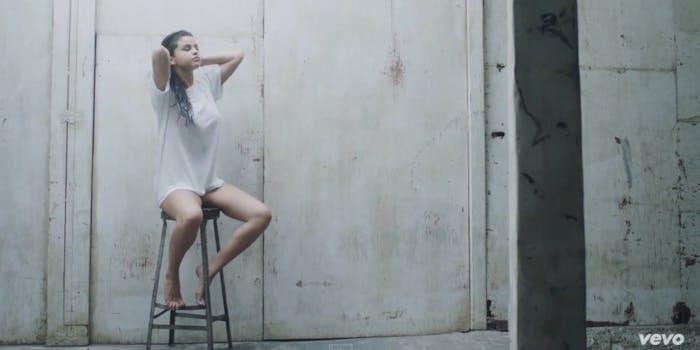 Another celebrity on social media is not a fan of 'Good For You.'

Selena Gomez has a certified pop hit on her hands. Her new song “Good For You” landed at the No. 1 spot on the Billboard Digital Songs Chart this past week— her first No 1. But a high-profile detractor doesn’t like the traditional values reinforced by the sultry new single, and he’s led the social-media backlash.

“Good For You” is the first single to be released from Gomez’s upcoming album, and it’s sold 178,000 copies. It’s also listed as No. 7 on iTunes Top Songs, as of Wednesday afternoon.

The music video for the song (which Gomez called “very performance-based”) debuted one week ago. It has 26,873,860 views on YouTube.

“I feel like the way I performed it, the way the story kind of unfolds… it’s my, my story,” Gomez said in a behind-the-scenes video.

“It’s how a woman feels when they wake up in the morning,” Gomez added. “When their hair is wet and when they’re in a white T-shirt. Things that make women feel sexy and feel beautiful.”

Gomez also said the song marks a personal transition: “The combination of it being a sexy song and feeling like a sexy young woman. I am becoming a young woman… A lot of who I am and who I think people kind of see me as are kind of different. It’s nice to kind of step into womanhood and I think that’s what this video represents.”

The two co-writers, Justin Tranter and Julia Michaels, also chimed in on the meaning behind the song.

“Whether you’re a man or a woman, masculine or feminine, there’s something so passionate about like wanting to look good for the person that you love,” Tranter said in the same behind-the-scenes video.

Though the song has been successful since its release, “Good For You” is not without its critics. In his Snapchat story, Frankie Grande (YouTube star and Ariana’s older half-brother) called the singer out. Listening to “Good For You” in the car, the caption reads “how about look good 4 URSELF?”

Since Grande’s criticisms have surfaced, “Selenators” and others have taken to Twitter to defend both Gomez and the song.

Just now realizing frankie grande tried to come at Selena and her new song…….. Know your place @FrankieJGrande sit down, no.

Amid the backlash, there are also those who praise Grande for his comments.

As of Wednesday afternoon, Gomez hasn’t responded to the criticism.