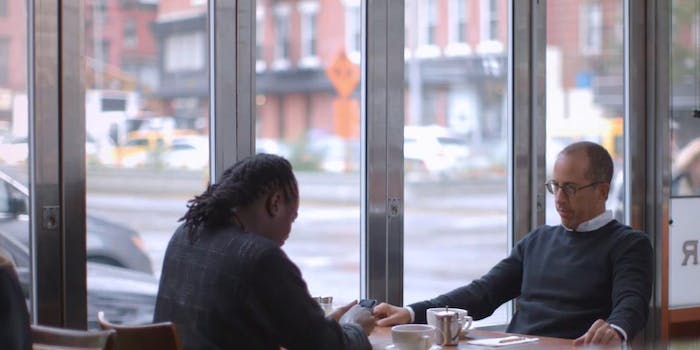 Yes, the two are making a hip-hop album together.

In 2008, rapper Wale released The Mixtape About Nothing: an ode to his favorite television show Seinfeld and its protagonist Jerry Seinfeld. Flattered by the recording, Seinfeld arranged a meeting between the two stars later that ended up sparking a friendship. This week they reunited for the cover feature in Complex magazine’s December issue. This may be the best interview Complex has ever done.

What may seem like an odd friendship on the surface actually isn’t that weird when inspected. The two are both exceptionally thoughtful and introspective entertainers and both are not-so-secret sneakerheads—just check out the Air Jordan 6s that Seinfeld’s rocking on the magazine cover. They’re also working on an album together titled, unsurprisingly, The Album About Nothing. On it Seinfeld will serve as a narrator, providing insight and context to most of the songs. His role on the album closely resembles his real relationship with Wale. Through their talks Seinfeld helps the rapper consider new and humorous ways to view the questions raised by everyday life.

One such question, that is addressed in the interview, is how to deal with the burden of celebrity. “I don’t understand the world’s fascination with celebrity,” Wale wonders out loud. “There’s a fame need,” Seinfeld replies. “We need people to look at or talk about to just fill the time. They say life is too short. It’s way too long! And we’re filling it in with a lot of fake stuff.”

Seinfeld also counsels Wale on how to deal with haters. “It has no substance for me,” he explains. “It’s like when somebody has a cigarette and they blow the smoke in your face. It’s going to be gone in two seconds. I don’t care.”

Finally, the two discuss strip club cuisine and the sorcery of exotic dancers—topics almost everyone can relate to. “Well, I started young. I got exposed to strippers at a young age, so I can fight their sorcery,” Wale laughs. “All strip clubs in the South have chicken, macaroni and cheese, and fried fish.” Seinfeld replies, “I understand chicken and naked women. I’d actually rather just have the chicken. I can’t eat chicken and look at strippers at the same time.”

In the interview Seinfeld and Wale play off each other to create a banter every bit as funny as it is revealing. It’s enough to make you wish the two had a regular video series where they just talked about, well, nothing. If the chemistry between the two translates to the recording studio this will undoubtedly be Wale’s best album yet.