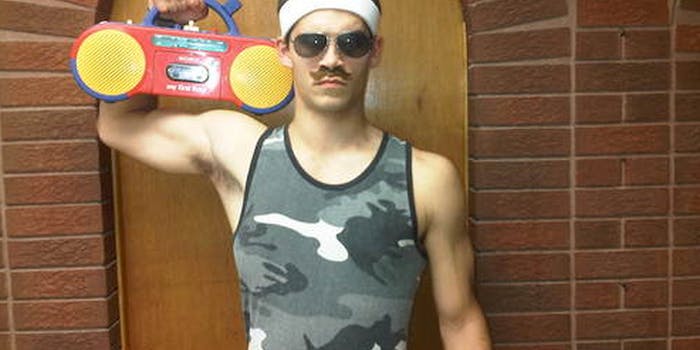 The online-video site has found its iconic gonzo stuntsman.

Sean Lamothe’s newest YouTube video, titled “What the people want? Fire!”, had already racked up 90,000 views when we reported on it Thursday afternoon. By Friday morning, the one-minute video—an unrehearsed documentation of Sean’s friend Kev eating flaming Doritos while Sean shoots a blowtorch on his hair—had climbed to more than 344,000.

The rapid ascent has helped make “Fire” the second biggest hit in the Ontario, Canada, resident’s mighty arsenal of viral videos, all of which he hosts on his YouTube channel, TheLamotheExperience. Lamothe currently has 20,632 subscribers and over 1 million views.

“This started off just for fun,” Lamothe told the Daily Dot. “I never expected anything serious to come of it. We just started posting the videos that we were making just for fun and they started to get a little [bit] of juice. Each time that I posted one, it ended up getting more and more views. I started to figure out that I was on to something.”

That “something” is a sixth sense for shock and awe. Lamothe specializes in the kinds of videos that made Johnny Knoxville and Jackass so famous in the early 2000s, videos that make viewers cringe and then quickly click replay so they can watch it again. Take his ”Man PREGNANT with an alien baby” video, for example, or “Shot 50+ times with a paintball gun,” which first finds Sean taking a two staples to his arm before backing up fifteen feet and letting his friend repeatedly shoot him with a paintball gun.

“Whatever we like, we do,” said Lamothe, who readily admits that there has been more than one occasion in which he and his friends will set up for a shoot only to realize that going through with the antics would probably put their lives in danger. “We try to go harder and harder each time, but we’re at a point now where we’re having trouble outdoing ourselves.”

That’s why Kev’s emergence has come at a most opportune time. Lamothe says that he met his Dorito-eating star just a few weeks ago, at a party at Lamothe’s house where things got typically out of hand.

“Kev started bringing up these ideas that you just hear and you’re like, ‘Okay, is that… really? Okay, let’s roll with that right now.’ That’s how the Dorito thing got started. He suggested it and we ended up doing it and it just worked out perfect.”

Called “Deadly Doritos,” the first video to feature Kev racked up 44,000 views before planing off. It wasn’t his best, but Lamothe knew he was up to something. Released seventeen days later, “What the people want! Fire” added the flame thrower and the burning hair and took off, eclipsing its predecessor’s total in just under a day.

Sheer audacity, but all part of a day’s work for Sean Lamothe:

“That’s what pays the bills nowadays,” he told us. “It’s just—we go with it.”