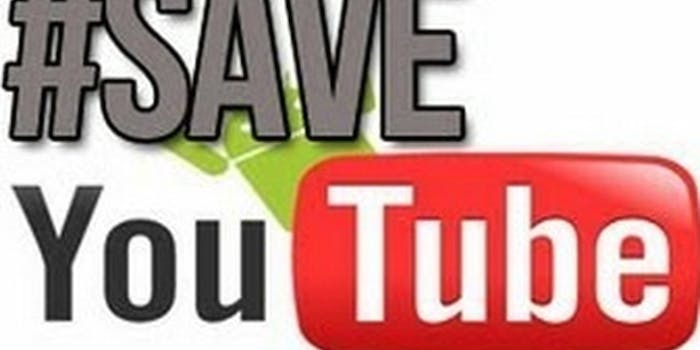 The battle to #SaveYouTube intensifies

Led by Onision, YouTuber users are actively protesting recent changes to the video-sharing site, prompting an official response from YouTube.

No one likes change, especially when it threatens one’s livelihood.

Led by prominent personality Onision, YouTubers are taking a stand against the Google-owned site over changes many feel are negatively affecting the community.

Following his initial call to arms last Friday, Onision has also upped the ante with two new videos that describe in detail all the issues the content creators currently have with the site. As reported here last week, that includes the site redesign known as Cosmic Panda, bugs that range from broken subscription boxes to actual subscriber losses, monetization issues, controversial Google+ integration, and a recently rewritten related-videos algorithm.

In the 5:06 video, the controversial and long-standing YouTuber predicts a doomsday scenario where all the top YouTube personalities leave the site. According to public data highlighted by Onision, many top YouTubers have already seen a decline of 50 percent in traffic. That’s due mostly to the redesign, which Onision addresses in a related, 15-minute rant.

“Make this our stand against what YouTube is doing to us,” Onision urges in one video, titled “YOUTUBE IS FUBAR! #SaveYouTube (ShaneDawsonTV, Smosh, NigaHiga & MORE SUFFERING HUGE LOSSES!).”

At press time, upwards of 100 people had uploaded response videos. According to social monitoring site Topsy, the Twitter hashtag, #saveyoutube, has also been mentioned 4,500 times, while #fixyoutube became a trending topic worldwide.

“.@YTCreators You guys seriously need to get your head out of the ground and sort YouTube out. ‪#SaveYouTube‬” Dean Martin wrote on Twitter.

It seems all the rabble-rousing worked. On Wednesday afternoon, YouTube released an official statement addressing the community’s concerns in a blog post, which seemed to deny many of the community’s claims and appeared to do  more harm than good.

Of the unsubscriber bug, YouTube claimed “this isn’t happening,” setting off a firestorm in the comment section.

“I understand getting rid of inactive/unused accounts,” Keith wrote. “But there have been MANY reports, including from my own subscribers, that they are being unsubscribed unknowingly. Many other more popular youtubers have voiced the same problem.”

“As always I really appreciate your team NOTICING us all complaining,” noted JoesDaily. “However to avoid the fact and deny that people are being unsubbed randomly is just wrong. Many popular YouTubers have posted proof on their Twitter and Facebook proving it is really happening. For your team to deny this is a big slap in the face. Just own up to it, FIX this shit, and move on.”

YouTuber user leetk3zzer succinctly summed up the community’s concern in a new response video: “The You in YouTube has Disappeared.”