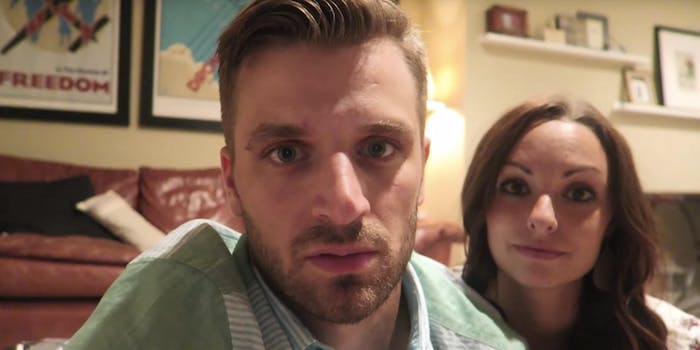 Rader said he was ejected from VloggerFair for an altercation with other YouTubers.

Just one day after controversial YouTuber Sam Rader admitted to using a paid account on Ashley Madison, the vlogger was kicked out of a conference for allegedly threatening violence against other attendees.

Rader and his wife Nia made national headlines earlier this month when he supposedly surprised his wife by telling her she was pregnant after testing her pee from a toilet bowl. They dominated the news again less than a week later when the couple announced they’d had a miscarriage, sparking accusations of them falsifying the pee video for YouTube views (they maintain the videos were “staged by God”). That first viral video has 14 million views on the platform, with the miscarriage follow-up clocking in with almost 5 million.

Then, this weekend, Rader attended VloggerFair in Seattle and was kicked out of the event for allegedly threatening other vloggers.

In a statement to Gawker, Rader said he had approached a vlogger at the event who had said disparaging things about Rader and his family’s videos.

“It was one person, and I didn’t make a threat,” he said. “What happened was there was a couple of fellow vloggers who had ridiculed our family on Twitter regarding the method we were mourning the loss, our miscarriage on Twitter.”

Rader said that he and the other vlogger were chest-to-chest and had a verbal altercation, after which he was kicked out of the event by organizers.

At the next con you're not invited to, definitely don't threaten violence against other vloggers? #trash #godbless https://t.co/hnAVE6LCYV

Look at all the people not getting kicked out of cons. Then look at the people who are. @carterreynolds @samandnia

Never seen anyone climb so high/fall so quickly so fast.I wasn't gonna drag this dude but you wanna threaten people and then play victim?Nah

A conferences first goal should be to keep people safe and sometimes that means safe from creators. Congrats @VloggerFair for doing that.

“We are still in the process of collecting reports from those who were witnesses to two separate situations catalyzed by Sam Rader in and around our event,” VloggerFair founder Chris Pirillo in an email to the Daily Dot. “It is not our place to judge Sam’s actions, but to have judged the best course of action which would ensure the safety of all other participants and attendees.”

Pirillo added that the organization was “wholly unaware of a certain pattern when Sam and Nia asked to participate in VloggerFair several months ago” and that the situations involving Rader were not indicative of VloggerFair on the whole.

This news comes hot on the heels of another controversy in the Rader household: Sam Rader’s name was included in the massive Ashley Madison hack, showing that he’d made a paid account in September 2013, the month his wife gave birth to their second child. While has not yet made a video about the VloggerFair incident, Rader did address his Ashley Madison use in a video titled “FORGIVEN.” With his wife sitting over his shoulder, he explains that his transgression, prompted by “pure fleshly desires and simple curiosity,” is in the past.

Rader promised Gawker that he’d address the VloggerFair incident in a video soon.

“All that you’re asking me is in my videos,” he said.