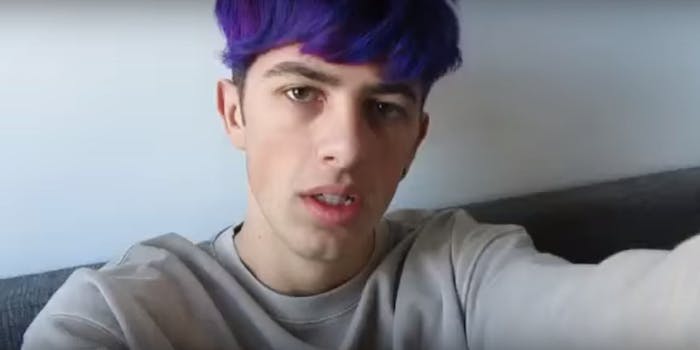 'This isn't a scam, a prank, a trick, nothing like that.'

YouTuber Sam Pepper has made a career out of controversy, and his latest scheme—before it vanished from the Internet—was one of his most ambitious ideas so far.

In a video posted this weekend, Pepper said that if he raised $1.5 million on GoFundMe, he’d delete his YouTube account. The video has since been removed from his page, but copies have popped up elsewhere on the site.

“This isn’t a scam, a prank, a trick, nothing like that,” he says in the video. “I am genuinely gonna be deleting this channel.”

In an email to the Daily Dot, Pepper said that the campaign was taken down because it “didn’t meet [GoFundMe’s] requirements,” adding, “I had a look for an alternative platform but didn’t find anything that had a trusted name.” Pepper said that he deleted the accompanying video because he felt there was no point in keeping it up if the GoFundMe page was gone.

With this short-lived campaign, Pepper was basically monetizing the widespread hatred inspired by his YouTube presence, which spans murder pranks, sexual harassment videos disguised as “social experiments,” and a series of sexual assault allegations. In his latest video, he advised his detractors to do something “meaningful” by crowdfunding to get rid of him, instead of just posting negative comments on social media.

GoFundMe was a smart choice for this idea, because unlike with Kickstarter, Pepper would be able to keep all the donations even if the campaign didn’t reach its $1.5 million goal. Even if he only raised a few hundred dollars, he’d still profit from people thinking they could bribe him into deleting his YouTube account.