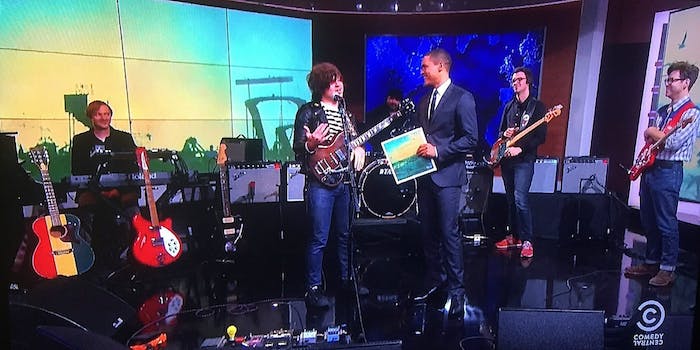 This is why Noah wanted Adams to be his first musical guest.

Ryan Adams, one of the most in-demand musical artists this side of Taylor Swift after he covered her entire 1989 album, took to The Daily Show stage on Thursday and played as Trevor Noah‘s first musical guest.

Adams and his five-piece band performed a solid rendition of Swift’s “Bad Blood,” one of the peppier covers on Adams’ 1989 album. It was a fine performance for the song that Daily Dot colleague Ramon Ramirez called “a stuck-in-Gainesville, Tom Petty makeover.” In fact, the rendition played by Adams on Thursday night might have been a little harder and faster than the album version.

After the final commercial break, Noah said he was a huge fan of Adams and of Swift, and he told Adams, “What was interesting to me is that a lot of people thought you recorded this album ironically, and yet, you did not.” Adams looked all around the studio for two or three beats and simply said, “Yes” before the two dissolved into laughter.

After a brief interview in which they talked about the process for recording the album, Adams played out the show with his version of “Style,” which was harder and faster than “Bad Blood.” Or as Ramirez wrote, it “rocks and pops like early U2.”

“He took Taylor Swift and… remade that to much acclaim and has done exceptionally well, and I really appreciate that,” Noah told journalists last week, via the Hollywood Reporter. “… He’s done in essence what we’ve done here—he’s taken something that was loved by many, cherished by many, and has created a new version of it for himself. And people have gone, ‘Wow, this is amazing. We can still like Taylor Swift but we can also like Ryan Adams’ 1989.”

Noah certainly can appreciate that sentiment as he tries to fill the slot that made Jon Stewart one of the nation’s most-trusted newsmen—fake or otherwise—and tries to fill people with the joy and laughter that Stewart did for most of this century. He wants to prove that people can like Stewart and Noah at the same time.

During his first week on the job, Noah did well. The interviews were unexceptional, but Noah and his correspondents were funny as they ran through the most pressing news stories of the week.

The only question left to be answered: When will Noah invite Father John Misty on the show?