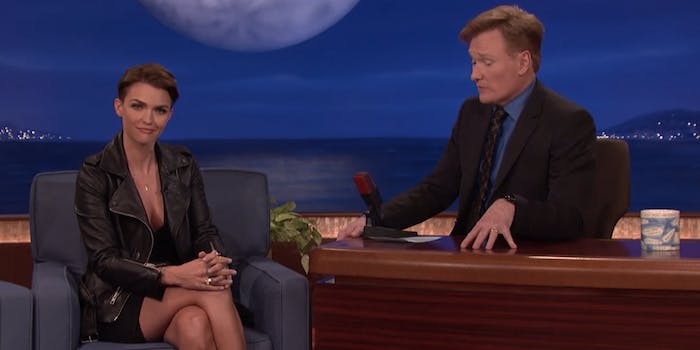 'It must be very frustrating for him.'

Never tell anyone who you think they resemble, even if it’s a celebrity. Not everybody has the same beauty standards and they could take it the wrong way. Unless, of course, you’re Ruby Rose.

When the Orange Is the New Black actress appeared on Conan Wednesday, O’Brien asked her how she felt about the comparison she often gets to Instagram lothario (and singer) Justin Bieber. “I hear that he gets asked a lot if he’s Ruby Rose, and it must be very frustrating for him,” she retorted. Rose commiserated with O’Brien who she says bears striking resemblance to the lovechild of Tilda Swinton, Meryl Streep, and Joel Edgerton.

“I’m glad you threw one guy in there, just to butch it up just a little bit for me,” a disappointed O’Brien said, feigning discomfort about his apparently feminine features.

Rose and Bieber, who get this comparison frequently, have been previously documented hanging out together.

I can’t say that I see the resemblance between Bieber and Rose, but whether or not she takes that as a compliment, beauty remains subjective.

Watch the clip below.