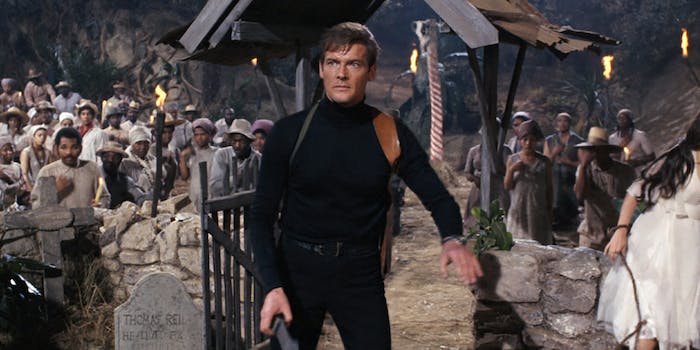 Photo via The Suits of James Bond

He died after a short battle with cancer.

Sir Roger Moore, the actor best known for portraying James Bond in seven films, has died in Switzerland, his children confirmed in a statement. He was 89.

Moore’s children said that Moore passed away “after a short but brave battle with cancer” and was surrounded with love in his final days. In the statement, his children—Deborah, Geoffrey, and Christian—highlighted Moore’s achievements not only as an actor, but his work with charity.

“We know our own love and admiration will be magnified many times over, across the world, by people who knew him for his films, his television shows and his passionate work for UNICEF which he considered to be his greatest achievement,” they said.

With the heaviest of hearts, we must share the awful news that our father, Sir Roger Moore, passed away today. We are all devastated. pic.twitter.com/6dhiA6dnVg

Moore was born in London in 1927 and served in the Royal Army Service Corps shortly after World War II ended. Moore’s career spanned decades, where he worked as an extra and dabbled in modeling. He co-starred in a number of films before finding success in television with shows like Ivanhoe, The Alaskans, Maverick, The Saint, and The Persuaders!.

He became the fourth actor to play James Bond after Sean Connery, David Niven, and George Lazenby inhabited the role, starting with Live and Let Die in 1973. His version of Bond was one who was witty and cunning, a secret agent who always had some kind of gadget in his arsenal, and fans often remember them with fondness. Moore played Bond for 12 years until announcing his retirement from the role in 1985—making him the longest-reigning actor to portray 007.

He acted for years after departing the James Bond franchise and gave back to others. He became a UNICEF Goodwill Ambassador in 1991 and was knighted by Queen Elizabeth II in 2003 for his charity work spanning more than a decade.

A private funeral for Moore will take place in Monaco.