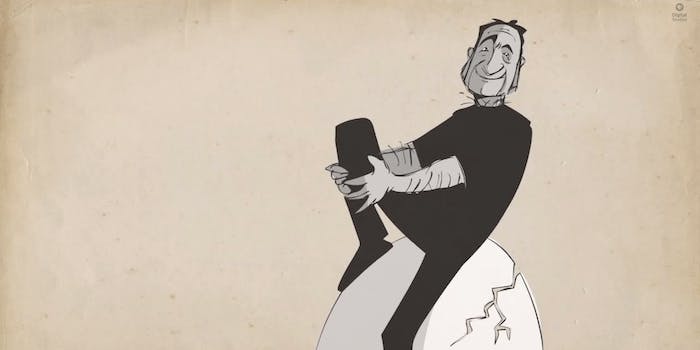 Robin Williams’ lost interview is as poignant as you’d expect

PBS Digital's Blank on Blank returns to give you a new interview with the comedy inspiration.

PBS Digital’s Blank on Blank has had an important role this year in giving us back lost voices. Now it’s turning to a “lost” interview featuring the wisdom and contagious comedy of Robin Williams to give us a poignant reminder of how important laughter can be.

Williams’ suicide sparked an international outpouring of mourning and conversations about depression. But perhaps even more, it simply reminded us the danger of taking for granted the presence of genius in our midst. And as the new uncovered interview reminds us, Williams was every bit a genius, as prescient and uncannily insightful as he was funny.

“There’s a world out there. Open a window, and it’s there.”

Williams originally conducted this interview with journalist Lawrence Grobel in 1992, on the heels of his triumphant voice acting turn in Disney’s Aladdin. In Patrick Smith’s animated version of the interview, his versatility and insight is on display: First Williams eerily predicts the weakening of the world’s economic infrastructure in the previous decade before sailing through to a hilarious description of the “wind tunnel” face you make during sex, and men’s hilarious inability to deal with their own emasculation.

Blank on Blank‘s animated rendition of one of Philip Seymour Hoffman‘s last interviews reminded us that life is a learning process at every age. When we last saw the series, it was unearthing a classic early interview featuring Janet Jackson, then still a child, interviewing her older brother Michael about the nature of talent. But if this trio of men who were taken from us too soon had uncanny insight into their passions, their interviews also reveal hints of their sadness as well.

Speaking of Williams in retrospect, Grobel told PBS that even though he “could twist serious into funny in an instant,” he was deeply aware of the real-life societal obstacles that got in the way of comedy:

When I asked him what made him cry? He said, “Just the insane violence all over the world, that makes me cry. And it’s unrelenting. I was performing in a club in New York and afterwards there was a guy sitting down with an Iranian, a Palestinian and an Israeli, and they all acknowledged that they want peace but they don’t know how to get to it. How do you create a Palestinian homeland when there’s a large amount of Palestinians who want to obliterate Israel? How do you stop this insane cycle that just keeps going on and on?”  When I asked him how he dealt with such matters as a comedian, he said, “You try and find a way to address it. Some people are better at it than I am. I haven’t hit that one yet. I’m trying to find interesting things to talk about with it.”

There are no such glimpses of sadness when Williams talks about his creative processes, however. When Grobel asks him if he worries about running out of ideas, his answer is pure hope, and pure Robin Williams: