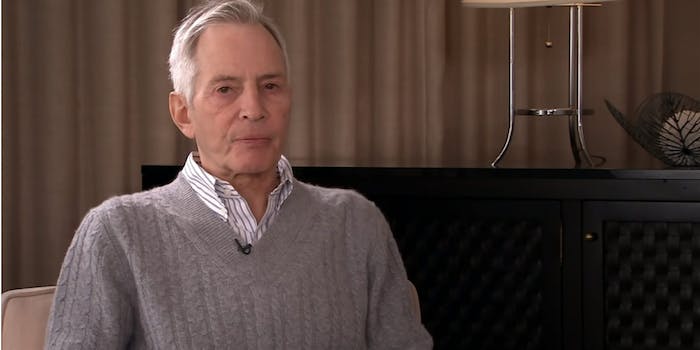 Susan Berman was killed 18 years ago.

Robert Durst, the man at the center of HBO’s 2015 true-crime documentary The Jinx, has been ordered to stand trial for the 2000 murder of his friend Susan Berman.

Durst was arrested and extradited in March 2015, just as The Jinx finished airing, for the murder of Berman in Los Angeles in 2000. A jury found Durst not guilty of murdering his neighbor Morris Black in Galveston, Texas, in 2003, even though he admitted to chopping up the body. But Durst had never previously been tried for the Berman murder. He pleaded not guilty to the charges in 2016.

Prosecutors believe Berman knew about the disappearance of Durst’s first wife, Kathleen, in 1982, and that he killed her because that case had been reopened and she was going to be questioned by the New York Police Department. In the final episode of The Jinx, filmmaker Andrew Jarecki provided Durst with evidence that he killed Berman, in the form of two letters. Durst denied it, but in a now-infamous scene in which Durst allegedly thought his mic was off, he admitted, “There it is. You’re caught,” before saying he “Killed them all, of course.” He later claimed he was on meth while filming parts of The Jinx.

Superior Court Judge Mark E. Windham cited those alleged admissions from The Jinx as evidence, as well as handwriting samples.

A trial date has not yet been set, but prosecutors are looking at a possible life sentence for the 75-year-old Durst if he’s convicted.