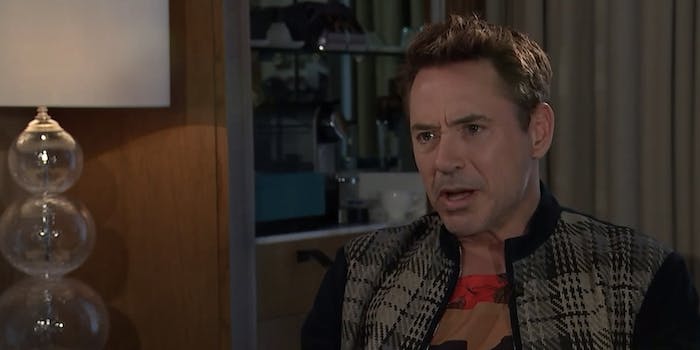 Robert Downey Jr. walked out of the most awkward interview ever

'Are we promoting a movie?' RDJ wonders aloud.

You don’t mess with Iron Man.

One journalist learned this the hard way, when Robert Downey Jr. cut a promotional interview with Channel 4 News in the U.K. short after the interviewer began turning questions toward Downey’s political affiliations and history with drinking and drug use. At that, Downey Jr. cut the interview short.

“You seem OK; it’s just getting a little Diane Sawyer,” the actor quipped as he left the room.

The questions came five minutes into a seven-minute clip from a junket for the new Avengers film. In situations like these, press are often asked to focus only on the promotional item at hand—in this case, the new film. When the questions took a turn from the promotional path, you can see Downey Jr. looking off camera, presumably to a publicist, who eventually cuts off the interview.

After Channel 4 uploaded the clip to YouTube and Krishnan Guru-Murthy, the news presenter in the clip, tweeted it out, he’s been defending his line of questioning, pointing out that Channel 4 doesn’t do puff pieces, that they’d told the publicist they wanted to talk about “the movie and his life” beforehand, and that a piece simply about the Avengers “wouldn’t make @Channel4News.”

@Nish1981 @Channel4News no the objective was an interview. we don't do promotional movie puffs – and PR people knew that as we'd discussed

@IanSanders yes I think so. We'd told the PR we'd like to talk about the movie and his life

Guru-Murthy sounds a little less confident of his intentions in the actual interview setting, face-to-face with Downey. Before he walked out, RDJ even pointed this out.