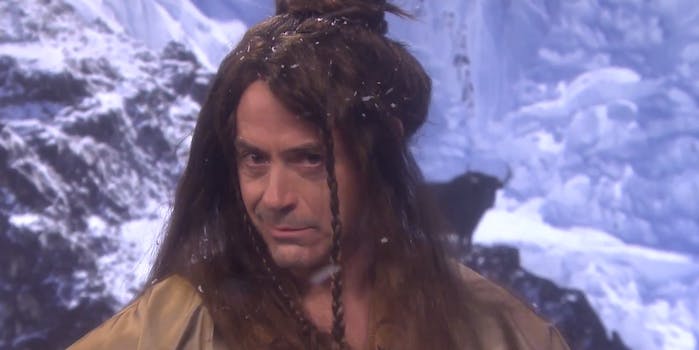 Let Robert Downey Jr. stare into the depths of your soul

And he's got some thoughts on life, the universe, and everything.

Robert Downey Jr.’s third eye is probably trying to tell us something.

He and Jimmy Fallon ponder life, the universe, and everything on the top of a mountain with a longer mane than usual, but they might as well be talking to us about what happens when you knock three times and the five elements—and yes, that includes Domino’s stuffed crust pepperoni pizza. And we’re listening.

He’s already toyed with our emotions by confirming and then denying an Iron Man 4, and he showed he can do it even when Marvel isn’t even on the table. All it takes is a sneeze or trying to communicate in dolphin and we’re hooked into living that semi-charmed life.

We’re still completely on-board the RDJ train, and it’s not even Avengers season.