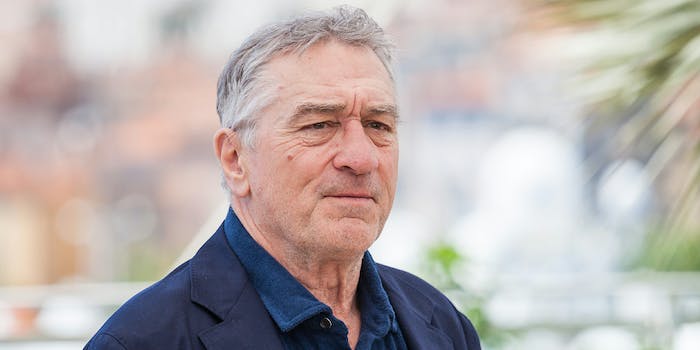 The Hollywood actor is the sixth Trump opponent to receive such a package this week.

Another suspicious package has been found, this time sent to a building owned by Robert De Niro that houses Tribeca Films and Tribeca Grill. If connected to the others, Thursday morning’s delivery would be the sixth of its kind. All of the packages have been received by—or intercepted on the way to—outspoken opponents of President Donald Trump.

The suspicious package was received around 4am ET Thursday after a worker noticed similarities between it and previous packages sent to prominent Democrats, according to NBC. Sources told NBC New York that the package was addressed to De Niro and displayed stamps and a return address similar to the other packages. The return address was to the ex-Democratic National Committee Chair Debbie Wasserman Schultz.

De Niro has been a critic of the president, calling him out at the National Board of Review Awards in January 2018, and even referring to him as a “flat-out, blatant racist” in August. Some Trump supporters vowed to boycott the 75-year-old actor after he said “fuck Trump” at the Tony awards.

The bomb squad extracted the suspicious package from the Greenwich property while the building was unoccupied, avoiding the need to evacuate. The newest package comes on the heels of the discovery of two packages addressed to Rep. Maxine Waters (D-Calif.). Both packages were intercepted, one while still at a Los Angeles mail facility and the second at a congressional mail facility in Capitol Heights, Maryland, according to NBC.

The first was discovered Monday, which was sent to philanthropist and left-wing activist George Soros. None of the explosive devices have detonated, and there have been no injuries. Authorities are on the lookout for another package, supposedly headed to former Vice President Joe Biden, after one was spotted by a postal service worker.

If connected, six bombs have now been intercepted. They were addressed to George Soros,  Hillary Clinton, Barack Obama, Waters, former CIA Director John Brennan, and former Attorney General Eric Holder. Since the discovery of the bombs, far-right groups have claimed that this news story is a “deep state hoax.”

“The safety of the American people is my highest and absolute priority,” Trump said in response to questions about the bombs. “The full weight of our government is being deployed to conduct this investigation and bring those responsible for these despicable acts to justice. We will spare no resources or expense in this effort.”

The explosives, constructed from PVC pipe with timers attached, all had the components necessary to create a successful explosion, senior bomb technicians told NBC. As authorities continue to combat the threat, forensic teams are hard at work investigating the source of the devices. An FBI representative said the devices all appear to be pipe bombs. Police have assured people that they have the threat under control, and that life should proceed as normal.

On Twitter, people are perceiving it primarily as a partisan attack. Those on the left assume that the bombs are motivated by Trump’s combative rhetoric, while those on the right see it as a stunt to garner sympathy for liberals. “Another choreographed #STUNT by @CNN #FakeNews and the #DNC to destroy a great economy,” one user wrote. “Bully Democrat crybabies will stop at nothing! #DefeatTheDems #NowOrNever.”

Lets playyy the right-wing blame game!#bombthreat
"It was muslims/antifa/the REAL nazis!"
"It's a left wing false flag!"
"He was mentally ill, why are you trying to politicize this?"
"This is no time for debates, let's talk about immigrants instead."
"Fuck it, they deserved it".

#bombthreat Another choreographed #STUNT by @CNN #FakeNews and the #DNC to destroy a great economy. ¡¡Sin Vergüenza!! Bully Democrat crybabies will stop at nothing! #DefeatTheDems #NowOrNever

Many people feel the attack came in part due to the president’s language regarding his opponents. He has on several occasions appeared to encourage violence among his supporters. Some directly correlated the attacks on Democrats to the president. “When you have a president who says he’ll pay the legal bills of anyone commiting a violent act against his protesters what could go wrong??” @ebenet wrote.

When you have a president who says he’ll pay the legal bills of anyone committing a violent act against his protesters…what could go wrong?? #bombthreat

On the 3rd day of #EarlyVoting, our country is in a state of alarming apprehension due to the #bombthreat. This is the danger of the incendiary language the President uses. He may see it as just words, but as America's Commander in Chief, many see his words as calls to action.

The highly polarizing topic will likely continue to split opinions, particularly during early voting for the 2018 midterms. Investigators are hard at work tracking down any other packages in transit, and police assured people that they are handling the threats.