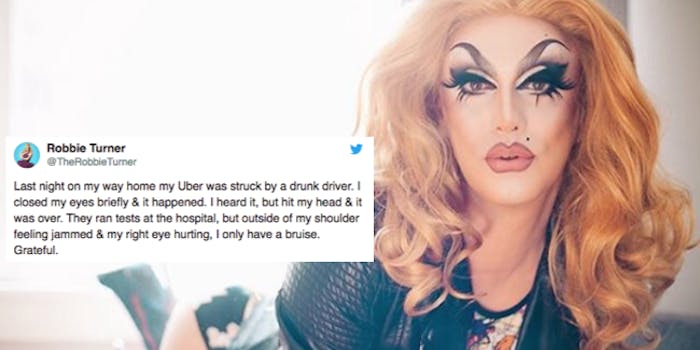 Robbie Turner is best known as a season 8 contestant on RuPaul’s Drag Race, but a recent story about an Uber ride is introducing the drag queen to a whole new audience.

Last week, the Seattle-based performer shocked fans when she tweeted about an apparent accident she’d gotten into during the ride home from a late-night gig.

“I just woke up. I’ve been in a car accident,” she tweeted. “I didn’t recollect it. I’m not certain what happened. My driver did not survive.”

Over the next few hours, Turner explained that her Uber had been hit by a drunk driver. While she had gotten out relatively unscathed with a few bumps and bruises, Turner said her driver had died as a result of the accident, and that the pair had been taken to “the hospital.”

Sometimes, not often enough, we reflect upon the good things
&those thoughts center
around those we ❤️

& I count the times I’ve forgotten 2 say
Thank you, & just how much I ❤️ them

Several LGBTQ-focused publications reached out to Uber and local authorities to do some reporting about the incident—and that’s when things start to get fishy. It seems like no one has any record of the accident at all. In fact, the only evidence that this car crash could have taken place comes from Turner’s Twitter account.

Seattle Gay Scene spoke to the Seattle Police Department, and a spokesperson told them, “I am not aware of anything like that occurring, nor are any of my colleagues aware of this accident.”

Nathan Hambley, a spokesperson for Uber, told the Stranger that no Uber drivers had been involved in a drunk-driving accident.

Turner’s home bar Queer/Bar contacted the drag queen on its own and said it was troubled by how little information Turner was able to give on the incident.

“In full support of our friend and manager, we reached out to evaluate Robbie’s condition,” management said in a statement. “We also reached out in an attempt to support the driver’s family in their difficult time. And then we discovered some inconsistencies with the story.”

Turner had ended her Twitter announcement about the accident with a tweet saying “the show must go on” and a link to an upcoming gig, so Drag Race alums started to suspect the whole thing might have been a tactic to boost ticket sales.

The drag community was divided on how to handle the issue: blast the move, or show empathy for a queen who’s most likely suffering from bad judgment?

To those making fun of Robbie Turner, please stop. Regardless of whether she’s a liar or not, she’s human. Instead of making jokes, we should offer help. It truly disturbs me to see so many of my sisters making fun. Those cheap laughs scar.

Robbie Turner’s Uber driver is with all those people that died at Stonewall.

I should have said something days ago. While one person’s dishonesty may be disappointing, I’m more disappointed in how many people are willing to kick that person while they are down. How do you hope people will treat you when you’re at your lowest? #cultivateempathy

For the time being, Turner is apparently taking a hiatus from her regular hosting gigs.

“Robbie will be taking some time away,” Joey Burgess, Queer/Bar’s owner and operator, said.