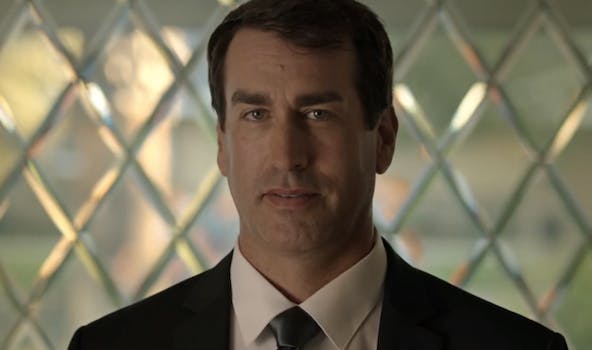 MadeMan's "Gentleman Up" PSA is raising money for charity with the help of your slickest duds.

Rob Riggle may embody the guy’s guy everyman, but he’s asking for men everywhere to graduate from sweatpants and fast food, and “gentleman up” for a good cause.

Riggle is featured in a humorous PSA where he calls out his slobbish alter-ego on his lack of gentleman bonafides and declares that “guys can do better.”

MadeMan, a men’s lifestyle site owned by DEFY Media, is behind the campaign. It asks men to improve their gentlemanly skills for a good cause. Riggle’s video encourages men to ditch the “casual Friday” outfits and don a suit on Nov. 7 for a #FormalFriday. It’s not just a fashion statement, however. Each selfie and video view equals dollars for CareerGear, a non-profit organization that aids men facing challenges as they prepare to re-enter the job market.

Riggle is also joined by Tom Lennon, whose The De-Evolution of Man series is also part of the #FormalFriday push.

Other DEFY Media staples like SMOSH, Sceen Junkies, Break.com, and Clevver will also take part in the campaign. November is a notoriously manly month on social media, with No Shave November (also known as Movember) encouraging guys to ditch the razors and raise awareness for testicular and prostate cancer. So if you see a lot of bearded, suit-wearing men on you social media feeds on Friday, know it’s all for good causes.