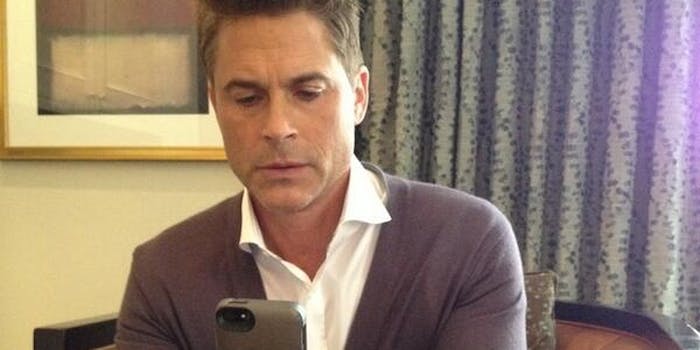 Rob Lowe’s Reddit AMA is literally about one word

So, this is, like, literally a story about one word. Literally.

So, this is, like, literally a story about one word. Literally.

When actor Rob Lowe answered questions in a Reddit AMA on Thursday, the Internet essentially reached its daily quota for the word “literally” by early afternoon.

Lowe’s Parks and Recreation character, Chris Traeger, uses the word “literally” in speech as often as humans use air in breathing. To be clear, that last sentence was both hyperbole and simile. It was intended to be understood figuratively, which used to be the opposite of literally.

A simple Cmd-F search reveals that Lowe and his audience, with all of the nearly 1,800 questions and answers displayed, combined to type “literally” 137 times. (Note: This doesn’t include every reply to every comment. The page crashed when I tried to display them all.) 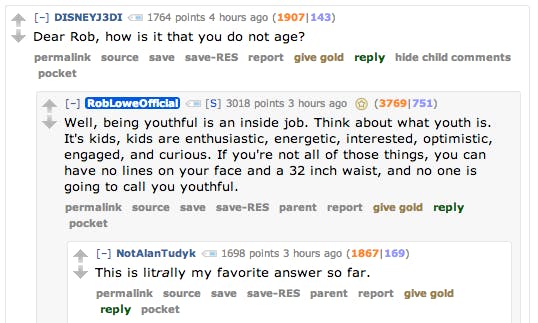 As a comparison, the word “time” came up 135 times—after subtracting the three times it’s used on the sidebar and the five times it appears as part of “sometimes.”

“Time” is about the 50th most common word in the English language. “Literally” is literally the 2497th most-common word, according to EnglishClub.

Let’s not even get into the fact that redditors came up with alternative spellings such as “Litch-rally” and “LIT-chrally,” in attempt to mimic the way Lowe’s character pronounces the word on Parks and Recreation. 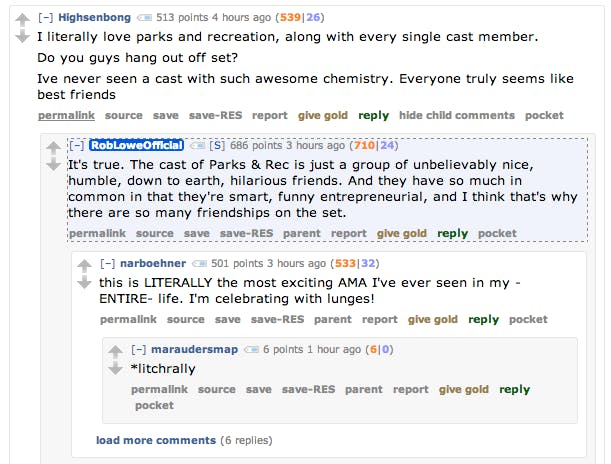 Redditor bamface, who thinks Lowe is “literally the best,” asked Lowe how often the word has crept into his everyday vocabulary.

“I literally cannot stop saying that word,” Lowe replied. “Although now that literally has become such a catchphrase, I literally need to find a way to begin to not say it.”

Despite previously trying to “banish it from [his] personal vocabulary for a while” in 2012, it seems Lowe not been able to kick the habit. He even used literally as a hashtag on Twitter as recently as this week.

This is not meant to be an indictment of Lowe or the writers of Parks and Recreation or anyone who uses the word too often. We all do.

Rather, this is just a unique opportunity to reflect on our changing language and how pop culture can create a feedback loop, amplifying linguistic trends. Chris Traeger says “literally” because Michael Schur, the cocreator of Parks and Recreation, noticed that a lot of people were misusing the word. Now, it’s a safe bet that the word is misused more than ever.

It has reached the point where the primary definition of “literally” has been sullied beyond repair, and dictionaries now include newfangled usage options. “Literally” now also means figuratively, and it carries hyperbolic and comedic undertones. Though as Reddit user ChaosScore notes, the comedy of “literally” may be sucomming to atrophy.

“Literally every comment in reply to him has the word literally,” ChaosScore said. “I think the joke is literally dead now.”

Aziz Ansari, who appears with Lowe on Parks and Recreation, did a Reddit AMA of his own in November. After displaying the first 2,000 comments on the page, the word “literally” does not appear one time.