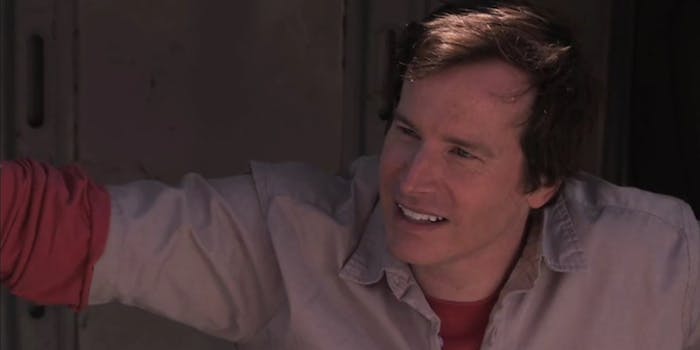 One week your co-star's George Clooney, the next it's a corpse.

There are few with a comedy CV like Rob Huebel.

After weathering the storm of John McEnroe’s eponymous talk show—which famously recorded a 0.0 Neilsen rating despite a theme song sung by the tennis star’s wife—he starred in the MTV sketch show Human Giant alongside UCB chums Paul Scheer and Aziz Ansari before racking up a torrent of eye-catching turns on every U.S. sitcom worth watching: Childrens Hospital, The League, Archer, Parks and Recreation, 30 Rock, Curb Your Enthusiasm, Arrested Development, The Office, The Mindy Project.

He seems busy. But in the calm before a new season of the Golden Globe–winning Transparent is dropped on the masses, now seemed like the right time to get Huebel on the line to ask what it’s like to be a comedian “going straight” and why L.A.’s Halloween decorations aren’t always what they seem.

Rob Huebel: Where are you calling from?

Well why don’t I put you at ease by starting off in an American context? How was your Thanksgiving?

It was good. Thank you for putting it in terms I can understand. Our American Thanksgiving was lovely; I went up to Seattle with my wife.

In your tweets you were giving it to your little cousin Duane, and his piss-stained teeth…

Yeah, obviously that person doesn’t really exist, I create fictitious people and family and just whale on them.

…which I expected. But I was wondering if you actually met with family or were just tweeting in a room by yourself.

I always forget that there are real people that actually follow me on Twitter. Yesterday when I got on the plane to come back, I started criticizing the flight I was on and making fun of the people of the TSA and all that shit. And this guy on the plane came up to me after and was like “Hey man I’m a big fan and was reading your tweets.” It’s just embarrassing.

For some reason you assume there’s some sort of disconnect there.

You think it just goes out into the world.

You’ve got this bunch of stuff that’s coming out soon—a new series of Childrens Hospital, the movie Night Owls, Transparent’s returning… Does it annoy you that all this stuff’s coming out at the same time? Because that must be a year’s work in the space of a few weeks.

(laughing) It’s funny because it makes you look more productive than you really are. You know, when you shoot stuff, you don’t have any control over when it’s going to come out. And then it all comes out at once, and so it makes it seem like you just made it yesterday but in reality you shoot it way far in advance. It helps convince my parents that I’m actually working hard.

But then it must work the other way when you’re working for six months on something that isn’t coming out for two years and it looks like you haven’t been doing anything?

Yeah, for sure. I just shot a movie with Will Ferrell and Amy Poehler, and I was telling my parents about it and they’re like “well, when’s it going to come out?” And it’s not going to come out until 2017. It takes so long; it definitely works against you sometimes.

The second season of Transparent [Huebel plays Maura’s son-in-law Len Novak] is coming out pretty soon. When you started getting into standup and improv, did you see yourself playing a role in something like this? It’s probably closer to drama than comedy.

No, not really. When I first started out, I kinda just wanted to do comedy stuff, and thankfully I had a fair amount of success. I’ve been able to be on I think almost virtually every American sitcom.

But the cool thing about Transparent is that the show is funny but not like a sitcom is funny. It all comes down to the writing. … The writers on that show are so good that you don’t have to worry about anything. There are so many things that can go wrong making a TV show or a movie, but if the writing’s good that’s like 95 percent of it.

Was there a link between getting this role and your work on The Descendents? Because I can see similarities between the two; at their soul is a sort of sad, reflective humor.

Yeah, it really just started with The Descendants. I mean I’m a big fan of the director, Alexander Payne, and I just got that off an audition. Originally I auditioned for Matthew Lillard’s part and ended up getting this other part and got a few scenes with George Clooney. It was really the first of these kind of more serious parts that I’d done. Alexander Payne’s movies are always very funny, but I didn’t have anything funny to do really.

Originally it was a challenge to see if I could pull it off. I’d done so much comedy, and I love doing comedy more than anything but to do a more serious part, it’s just harder for a comedian. You just have to hope that people will take you seriously. That’s what I was kind of worried about, hoping that when I came on screen, people wouldn’t expect me to play what I normally play. Some sort of goofball.

Goofball? I’ve always thought in your comedy you came across more as a sociopathic prick.

I’ve got a pretty good track record of playing assholes and douchebags. I just like those guys. I have two brothers, and we used to always laugh at oblivious people. People who are so cocky and full of themselves that they just don’t realize how stupid they are. And those kind of idiots really make me laugh. I don’t think that I’m a terrible person in real life, so it’s really fun to play a terrible person and get paid to do it.

Do you think there’s much crossover in audience between say, Transparent and Childrens Hospital? Would people recognize you from both?

It’s too easy to access, so many channels, Netflix…

Yeah, I have a real problem now when I go onto Netflix; it takes me a half hour to pick something out. They’ve got to figure something out, whether it’s their algorithm… Maybe if they had it curated like a video store: “Will Ferrell recommends this movie” or “Jennifer Lawrence recommends these 10 movies.”

Apparently though, some people love flicking through. That’s why they still have it. It’s the highlight of their day. The laboriousness.

Ugh, it gives me anxiety. I just want it to pick something. Or maybe give me a choice of like, two things. When I go on there, I just go down a rabbit hole.

I want to ask you about your series Do You Want To See A Dead Body. It’s going to be on Comedy Central?

Well I hope so. I’m going to shoot the pilot for it.

How does it relate to the shorts with the same name you did for Funny or Die on HBO?

It’s expanding on those shorts. So yeah, I shot them for Funny or Die a few years ago where I take celebrities out to see a new dead body each week. We never explain how I find these bodies…

Yeah, that’s what I’ve never understood. It seemed like you didn’t know if there was a dead body or where it was, but you always ended up finding one.

That’s the beauty of it, we never explain it. I don’t know that we have to.

I agree. But how do they always stumble upon a dead body? It’s intriguing.

Yeah, like, am I in some sort of club? Is there like a chatroom? Do I have an app on my phone?

You’re always very confident that you will find one. But then surprised that it is where it is.

Right. So the series is just a longer, more complicated version of that. Every week I take a different celebrity to see a different dead body. But that’s really just a jumping-off point. What it really is is me forcing them to hang out. Sort of me shoehorning myself into a relationship with someone I don’t really know that well.

But what I’m proposing to do is to use actual dead bodies in the show, that’d be really cool and people would be excited to come out and see a real dead body. I don’t know if Comedy Central would allow that though. Or the City of Los Angeles. Or the Health Department.

Are you worried there’s going to be some sort of Stand by Me lawsuit?

No, that’d be great. Stand By Me is a great movie. But yeah that’s just sort of the jumping-off point. It would start off like Stand by Me, but every episode would take a totally different turn and sometimes we don’t even find the body, sometimes there isn’t even a body. I just lie because I wanted to hang out with them.

Have you ever seen a dead body, personally?

Um… Yes, I have. I think I saw my grandmother when she died. And we just had this thing out here—this is horrible—there was a guy around Halloween who was in a car accident and his body flew out of the car, up into the air and got stuck on a sign over the highway. It was like 30 feet up in the air and got stuck there and his body was hanging onto this sign. It was shocking, but it was the day before Halloween so a lot of people thought that it was a Halloween thing. So I saw his body. On the news. In real life, I don’t really know that many dead people.