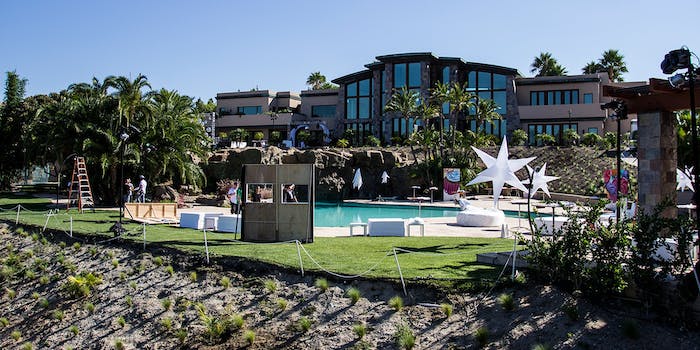 Meet the duo behind Rise9, the most exclusive club at VidCon

But what's the point?

Rise9 launched at VidCon last year with a splashy mansion party that featured mermaids. Attendees, accustomed to staying within walking distance of the convention center, had to board a bus to a secret locale. An actual, metallic “golden ticket” was required for entrance.

For all the fanfare, Rise9 remained shrouded in mystery. A year later it’s set to return to Anaheim, California—and we finally know what they’re doing.

He doesn’t literally mean mermaids at all times, but he does mean that type of VIP experience. Rise9 wants to be the exclusive club for the influencer set. The velvet rope-lounge for vloggers.

James and co-founder Alex Negrete have a long history in the digital space. Negrete’s legacy channel, Keep The Heat, still boasts 663,000 subscribers, despite him taking a break to battle testicular cancer—a diagnosis that he says helped him balance life and pursue new ideas. James also ran a channel, Outback Zack, though he removed nearly all of its content so that his multi-channel network—the company he’d partnered with to help sell ads—couldn’t keep making money from his video views (most notably with a rant in 2013 against companies like Machinima and Maker that he believed took on lots of funding and weren’t actually helping content creators). Machinima cut ties with James that year, and both he and Negrete have since moved on to Facebook channels, running a handful of powerful meme accounts like YoMama , Keep the Heat, Living the Single Life, and AniMeme.

“I don’t want to come off as pretentious, but I want everyone to find a quality to the environment.”

Now they’re turning their attention to building a new social club for the digital elite. It’s not an easy task. For one, they haven’t found a physical space, but they also want to make the experience something beyond four walls.

“We see this as a place that feels professional yet comfortable, relaxed but a sense of high energy,” says James. “We want people to dive into their work in an environment that’s a home away from home. It’s not just a place, but how can we do this on a regular basis? How could a hiking group achieve this? How could a vacation achieve this? We want this in the everyday lifestyle of an influencer.”

There’s a line that James and Negrete draw between “creator” and “influencer.” Anyone who picks up a camera or starts a Vine profile can become a creator. An influencer is more specific: This person, through their videos, has picked up a following and can impact those people in their tastes, spending habits, and opinions.

That’s who they want in the club. And chiefly because James and Negrete say they’ve seen events like VidCon, which were once aimed more directly at creators over audiences, transition from a networking space just for influencers, to one overrun with fans and brands.

“When we first went to VidCon, we used to experience these parties that made us feel like a rock star,” James says. “Like, ‘Yes, this is why we’re influencers, this is why we’re in the industry.’ We’re here to not simply just create content or make a living from it, we’re here to have a lifestyle. You don’t have any of those events anymore. It doesn’t make any sense to RSVP for a party when you know that everyone else has RSVP’d and half of those RSVPs have to stand outside for hours.”

Continues Negrete: “We want to provide more of that atmosphere where you can interact with influencers and creators. … When you’re in a room you know everyone you meet is doing something cool.”

Last year VidCon instituted a Creator track for those who aren’t yet established industry players but looking to learn and create during their VidCon trip. The pure Community track—a credential for fans just wanting to witness their favorite stars—remains the most popular attendee option. James and Negrete want to focus on experiences exclusively for the influencers, the ones who can’t walk the main hallways for fear of being mobbed.

Yet determining who gets into the club is another tricky proposition. Since the early days of VidCon not only has attendance ballooned, but the pool of digital video creators has as well. Where do you draw the line between a bonafide influencer and a wannabe?

“We’ve been in a situation that’s an open event and we’ve been bombarded by people and questions that are not attractive to us,” explains James. “I don’t want to be at an event where 10 people ask me how many subscribers I have. I want to be in a place where they ask what brings you here? What makes you, you? I don’t want to come off as pretentious, but I want everyone to find a quality to the environment.”

The initial plan is like any exclusive club: Focus on the people they know, and people they don’t who have a strong reputation. Eventually they envision a committee structure and nominations similar to SoHo House (an international members-only club that caters to the entertainment community in places like Los Angeles, New York, and London) that require members to be recommended by at least two current participants.

But to compare themselves to a place like SoHo House leads to the question of why a digital creator would want to be in an influencer-specific club, when the mainstream has begun engaging so directly with digital: Why box themselves off?

James and Negrete think the key is forging a club that isn’t beholden to traditional entertainment players.

“When I look at Hollywood, and I look at TV, there’s a structure that needs to be adopted to the new media world in order to make this a healthy industry,” says James. “The trick for us as influencers is yes, individually it’s cool to [land] a book deal, but everything we make, how can we make that deal more catered toward defining an industry?”

The other murky area is what will the creators get, tangibly, out of a club membership? James and Negrete don’t have specifics beyond building a community that mirrors YouTube, where those creators have already found ways to collaborate on creative projects through individual networking. James and Negrete’s goal is to capture what they felt in the in the early years, at those first VidCons, in the form of their own club.

“It was a community, but it felt like a club in and of itself,” says Negrete. “[Rise9 is] just about making sure the community and the culture evolve as platforms grow.”

At their VidCon party this week, they’ll focus on that community.

No mermaids this time, but there will be a Delorean. Now they just need that community to show up.