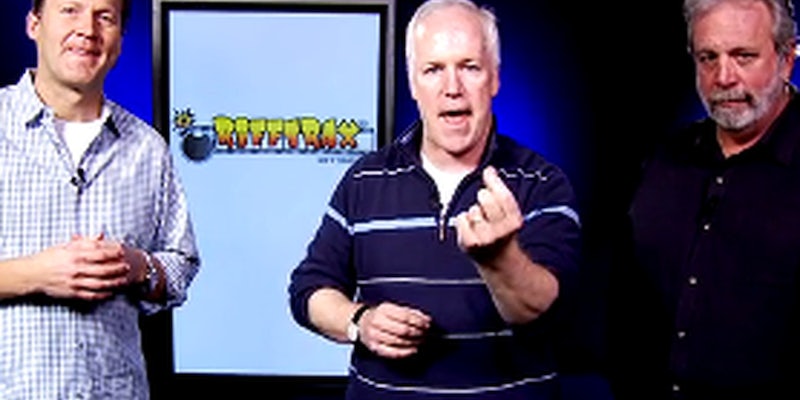 The Rifftrax folks, famous for making fun of bad movies since they starred on Mystery Science Theatre 3000 in the '90s, are raising money for the rights to perform a live mocking of Twilight.

RiffTrax, the beloved online cult favorite that sprang from the beloved ’90’s TV series Mystery Science Theatre 3000, has been providing the irreverent commentary for all your favorite worst movies for years. But although creators Mike Nelson, Kevin Murphy, and Bill Corbett have done live riffs on fan favorites before, RiffTrax’s most popular movie snarkfest, Twilight, has remained unattainable–until now.

Earlier this week, the RiffTrax guys launched a Kickstarter campaign asking fans to help them purchase the rights to perform Twilight in public. Eager to encourage one of the best things Twilight ever gave us, fans responded in droves. In just 5 days, the Kickstarter has raised $180,000 from 3,800 backers and counting, well over triple the originally requested amount. That will enable Rifftrax to snag performance rights not only to Twilight, but to many more favorite Rifftrax movies previously off-limits.

RiffTrax continues the ignoble MST3K tradition of making fun of bad (and good) movies while you watch. In the days of MST3K, which ran for ten years on Comedy Central and later Sci-Fi. Most of the MST3K canon is available to watch on YouTube; here’s one of our favorites, featuring Nelson, Murphy, and Corbett in their respective MST3K roles as Mike, Tom, and Crow.

With MST3K, the hilarious commentary track aired while you watched the movie. But MST3K was limited to public domain films or extremely cheap older B-movies. In order to gain the ability to riff famous, popular movies, and stuff people have actually seen, Rifftrax has always released its snarky laugh tracks as a standalone accompaniment. What you do with the audio is at your own peril. Currently, the only way to watch a Rifftrax movie with the commentary is to sync up the (legally purchased) movie and the (legally purchased) parody track yourself—or find a pirated version where someone has done it for you.

In addition to the online release of its commentary tracks as separate downloads, RiffTrax has also scored big with nationwide simulcasts of live performances, shown as special events in movie theatres. However, due to the high cost of recently released films, these performances have thus far been limited to old cult hits like Plan 9 or cheap disasters like Birdemic.

“We have already written and performed a great riff for TWILIGHT and it’s our best seller, but the only way you can currently watch it is by syncing our MP3 of the riff with the DVD of TWILIGHT,” the Kickstarter explains. “If we want to perform the RiffTrax LIVE for you in theaters nationwide this August, we need the rights for the movie itself.”

If Summit Entertainment / Lionsgate allow Mike and the gang to purchase the performance rights to Twilight, it will be the first time they’ve gotten to publicly perform a movie of such mainstream stature, and their first attempt at an epic love story since they riffed Titanic.
So what happens if they don’t get Twilight? If the Twilight producers won’t let RiffTrax have their movie, RiffTrax will find someone who will: they’ve pledged on their Kickstarter page to go down their audience-selected worst movies of all time list until they find one they can buy the rights for. Right now, Twilight holds the #1 spot, ahead of the previously riffed Batman and Robin and the Razzie award-winning Catwoman. Over 35,000 voters selected it in the 2012 poll, which drew over half a million votes in all.

Even if Twilight remains out of their grasp, with 26 days left in the Kickstarter campaign, they have plenty of time to fundraise mocking rights to the entire film canon. In the meantime, you can ponder what worst movies you’d like them to do next, and check out the highlights from their Twilight riff.