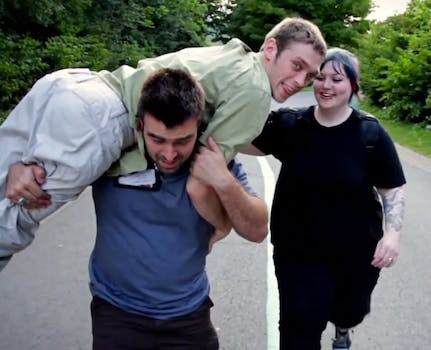 In Riding Shotgun with Zach Anner, the cerebral palsy-stricken comedian travels the country in the pursuit of "the perfect day" with redditors.

Zach Anner’s traveled 6,500 miles and met with countless redditors, and today, the Internet will finally become privy to the fruits of Anner’s extensive labors.

Anner, the cerebral palsy-stricken comedian who’s long been much beloved by the Internet and Reddit community, just released the debut episode of Riding Shotgun with Zach Anner, a YouTube-hosted Web series that finds Anner and three friends traveling the country, in seach or “the perfect day,” as preordained for them by suggestions from redditors.

Anner posted the first four episodes of the series Tuesday morning, with the first four clips detailing his adventures through Montreal with a redditor named Veronica.

The first clip found Anner and his crew arriving in town and taking note of “all the French stuff.”

In the next episode, titled “Baby Hitler and Riot Rabbit,” Anner tries to break up an engagement photoshoot in an effort to “get to know the locals.”

“Sometimes all you’ve got to do is ask, and then you’re part of an engagement,” he said.

From there, they hit up a cathedral, went to Chinatown, and saw a picture of a baby with a Hitler mustache. Anner and the boys hit up a street parade to close out the day.

It’s in the third clip, “Strippers and Raccoons!,” that Anner meets Veronica, and they immediately get down to the nitty gritty, talking about how many piercings she has before heading to a strip club.

It’s worth mentioning that Anner gets on stage and struts his stuff for a few minutes in this clip.

Veronica’s final adventure takes Anner and crew to a Montreal graveyard, where she and Anner explore Veronica’s interest in etching the designs on tombstones.

All told, the trip was a massive success, and Veronica emerged victorious in her attempts to expose Anner to something new.

“I never could have imagined that our first actual day in Montreal would end coloring in a graveyard,” Anner said in retrospect. “But that’s Veronica’s perfect day, and it’s awesome.

“It’s only because of her perspective that we were able to do it. So I’ve got to say, thank you Veronica. Thank you for showing us your Montreal.”