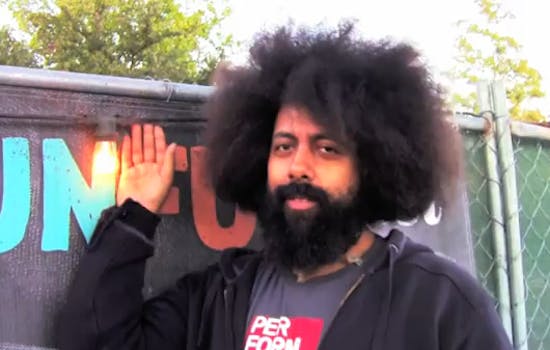 The madcap beatboxing genius talks to the Daily Dot about his "hit-and-run" approach to Twitter and Facebook.

Reggie Watts, the stand-up comedian and beatbox extraordinaire, uses Twitter like a “graffiti wall” and is currently releasing performances exclusively on Facebook. He talked to the Daily Dot about using the Web to connect with fans and “control the message.”

His sprawling online connections and vast Vimeo archives, however, don’t take away from the experience of watching him live. At Fun Fun Fun Fest this past weekend in Austin, Texas, the Conan regular channeled more voices than a shaman. Accompanied only by a looping device, Watts layered and tweaked his vocals to extraordinary effect, sounding at times like slow-motion R&B and hypersonic dubstep. (Most of the set can be viewed on YouTube.)

This one is in “13-6 timing and triple E-flat,” he noted at one point, and I’m still not certain that he was joking.

Backstage, Watts discussed with the Daily Dot his epic rendition of Thin Lizzy’s “The Boys Are Back in Town;” his downloadable performance from NYU’s Skirball Center, “On Life and Quantum Entanglement,” and his “hit-and-run” social media presence.

Videography by Logan Youree for the Daily Dot