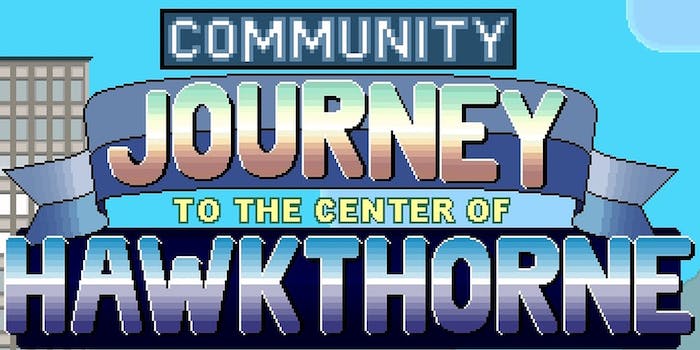 Now you can play Journey to the Center of Hawkthorne.

Community is nothing if not ambitious.

Towards the end of the cult comedy’s third season, NBC aired an episode where characters played a video game called Journey to the Center of Hawkthorne. The entire episode was built around the characters playing the 16-bit game, with Pierce Hawthorne’s inheritance on the line as they learned some life lessons and made jokes along the way.

The free game, which has been downloaded more than 16,000 times, is a work in progress, and the gameplay is fairly straightforward for the time being as development continues. For now, characters are limited to running and jumping, while there are only four playable areas.

Redditor Deferman is the driving force behind the game, though around a dozen others have helped with development. Fellow redditors are submitting everything from character designs and chiptune versions of music used in the show to sound effects.

Updated versions of the game are being released every few days, with the most recent version getting an ending screen after the village level. Previously, gamers were stuck in an loop as they were returned to Greendale Community College after working through the current levels.

Perhaps the best part of the game as it stands is the alternative costumes that can be bestowed upon each character, from Batman Abed and Jeff as David Beckham to Britta’s T. rex get up and Troy’s take on Ridley from Aliens. The “darkest timeline” version of Jeff is even missing an arm. That’s attention to detail for you.

Unlike the proposed Inspector Spacetime Web series, NBC has not yet put the kibosh on this fan-created effort. Redditors have discussed the copyright issue, though.

Getting the details right is something show creator Dan Harmon takes pride in. Though he’s yet to play Journey to the Center of Hawkthorne, we have a feeling he’ll be impressed by it.