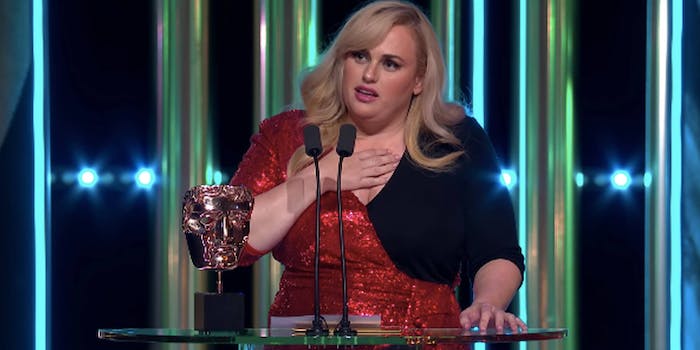 She also seriously roasted 'Cats' while she was at it.

The Oscars may persistently fail to nominate qualified women for the Best Director Academy Award, but—in news that will shock roughly zero people on the face of the planet—they aren’t the only big award ceremony to keep paying attention to only (almost exclusively white) dudes.

The same five men who are nominated for directing at the Oscars this year were nominated in the same category for this year’s British Academy Film Awards, more commonly known as the BAFTAs. But just because this one-sided nonsense keeps happening doesn’t mean everyone is willing to let it slide.

Rebel Wilson had the honor of presenting the award this year and took the opportunity to take aim at the lack of female nominees. And she slid toward the joke in such a gradual, sly way so characteristic of Wilson’s humor that we can’t help but appreciate it.

After making some well-received cracks about her vagina, Wilson shifted to the theme of the night, sustainability. Attendees were encouraged to wear clothing they had worn to previous events—something that’s usually considered a big celebrity no-no—or to rent pieces, in an attempt to be environmentally conscious.

@karindarnell snapped these as I was heading out the door x

“So I made this dress by sewing two old dresses together,” the Pitch Perfect star claimed, noting her two-toned outfit. “The red is from that one time I didn’t win Miss Australia, and the black is from a funeral I just went to for the feature film Cats.”

Of course, Cats, in which Wilson played Jennyanydots alongside big stars such as Judi Dench, Jason Derulo, and Taylor Swift, was an astonishing failure of a film, panned by critics and destroyed at the box office before ultimately being pulled from all award consideration.

“I’m not sure if everyone here is across the controversy, but this year there has been a distinct lack of nominations…for felines. Even in this best director ‘cat’-egory, no felines have been nominated,” Wilson continued, inching closer to the criticism literally everyone had to know was coming.

“Sam Mendes. Martin Scorsese. Todd Phillips. Quentin Tarantino. Bong Joon-ho. I look at the exceptional daring talent nominated in this category, and I don’t think I could do what they do. Honestly. I just don’t have the balls,” she said.

The crude but beautiful call out wasn’t lost on the audience, who roared in applause and laughter. Though, as wonderful as it is that we have celebrities willing to call out these award ceremonies for being so skewed toward male creators and male-led projects, and as excellent and worthwhile as most of the jokes are, it might be better if we could actually just start seeing women nominated for their work instead.

If and when that happens, we’re sure Wilson won’t have any trouble coming up with other topics to joke about. Probably involving her vagina.