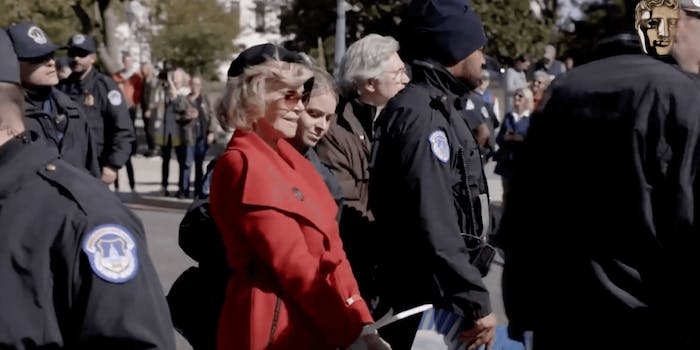 This is Fonda's third time being arrested for protesting climate change inaction. Her protests are now getting the meme treatment.

Actress Jane Fonda accepted her BAFTA award while being led away in handcuffs. Fonda and actor Ted Danson were arrested during a climate change protest on Friday.

The 81-year-old received the Stanley Kubrick Award for excellence in film at the annual BAFTA Britannia Awards. She was not able to accept her prize in person, so she recorded a video message instead.

On the recording, the audience sees Fonda being arrested in Washington, D.C. as she shouts “BAFTA, thank you,” while being led away. “I’m very honored,” she later adds. Previous winners of the award include Cate Blanchett, George Clooney, and Meryl Streep.

“It so traumatized her that she stopped speaking and eating,” Fonda said, according to the Washington Post. “And when I read that it rocked me, because I knew that Greta had seen the truth. And the urgency came into my DNA the way it hadn’t before.”

To make matters even more interesting, Fonda plans to get arrested every Friday—until she has to film another season of Grace and Frankie—for the cause.

This is Fonda’s third time being arrested while protesting climate change, and she always brings famous friends with her to the protests. Her protests are now getting the meme treatment.

“If you are an actor over 70 and you haven’t been arrested with Jane Fonda your status is slipping boo,” writer Rachel Syme tweeted.

if you are an actor over 70 and you haven't been arrested with jane fonda your status is slipping boo https://t.co/sBCKmZkIxg

Jane Fonda bringing out a different celebrity to get arrested with every week really puts the 1989 tour to shame.