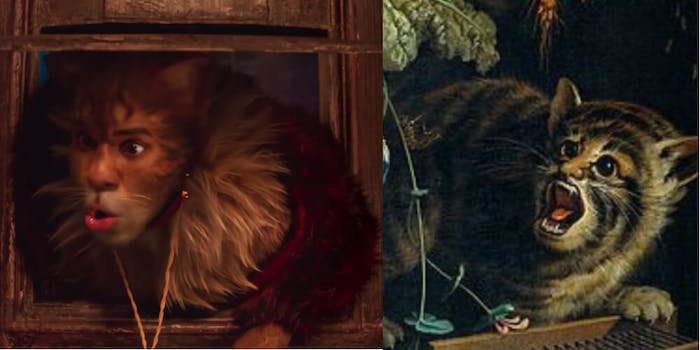 The ‘Cats’ cast has an uncanny resemblance to medieval cat paintings

Had these painters ever seen an actual cat before?

People are not fans of Universal Studios’ Cats.

Reviews have been flooding in since the film hit theaters on Dec. 20, and the reaction has been harsh. While most people found plenty to laugh at in the film adaptation of Andrew Lloyd Webber’s musical, few found much to enjoy in the movie. In response to the terrifying appearance of the overly humanoid cat characters, memes quickly began flooding the internet.

One user drew comparisons between the cat’s startling appearances and the historically terrible depictions of cats from the medieval era.

THE CAST OF “CATS” AS MEDIEVAL CAT PAINTINGS: A THREAD pic.twitter.com/CZhxj1u5fm

What followed was a truly terrifying, but remarkably accurate, thread of memes.

Why were medieval people so bad at painting cats? Had these people ever seen an actual cat before?

Jason Derulo‘s medieval counterpart is my favorite. Why does that cat have a human mouth, and why—dear god why—is it screaming? Maybe it paid to see Cats in the theater.

These memes are strangely, shockingly accurate. Perhaps the people behind Universal Studios’ adaptation based their character design on some of this remarkable art.

“Anyone who is attracted to Idris Elba be warned: every time he meows or shouts one of his cat-phrases my entire soul left my body,” Twitter user @MsGeorgiaOQueef wrote.

Also anyone who is attracted to Idris Elba be warned: every time he meows or shouts one of his cat-phrases my entire soul left my body.

This happens several times. I may never recover.

I watched Cats in a sustained, two hour, full-body recoil. It is HIDEOUS. It is TERRIBLE. It is NIGHTMARE and CHAOS come to horrible life.

I’ll have a detailed analysis on Thursday but here’s my capsule review of #catsmovie:

I SAW CATS. And of everything In the movie. This was the most upsetting. The tap dancing cockroach number. Who let this happen???????? #catsmovie pic.twitter.com/TSEVtC2kwh

There is no drug on earth like this, no chemical that can produce the horrific visions this movie presents.

If you haven’t already seen Cats, it appears to be well worth the two-hour runtime–even if only for the memes.