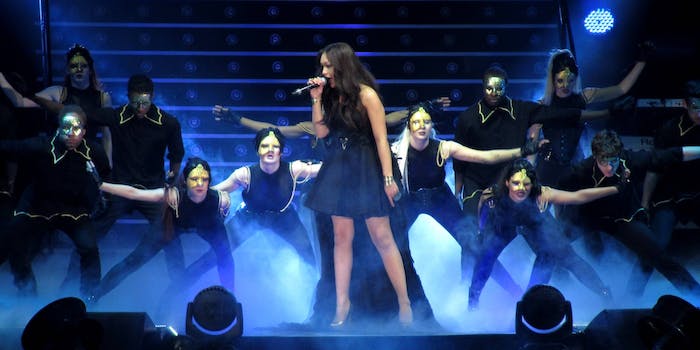 She wants to sing a song about lynching.

Rebecca Ferguson, a British singer who was the runner-up of the U.K.’s X Factor in 2010, posted a message to TwitLonger on Monday addressing the inauguration. She revealed to her followers that she’s been asked to perform for Trump at his inauguration later this month, but she’ll agree to it only if the Trump team allows her to sing “Strange Fruit.”

“I’ve been asked and this is my answer,” Ferguson wrote. “If you allow me to sing ‘Strange Fruit,’ a song that has huge historical importance, a song that was blacklisted in the United States for being too controversial. A song that speaks to all the disregarded and downtrodden black people in the United States. A song that is a reminder of how love is the only thing that will conquer all the hatred in this world, then I will graciously accept your invitation and see you in Washington.”

“Strange Fruit,” which was recorded by Billie Holiday in 1937 and covered in later years by a variety of artists including Nina Simone, addressed the lynching of African-Americans in the early 20th century in its lyrics. While controversial at the time, Holiday’s version of the song was later preserved by the Library of Congress’ National Recording Registry.

“This searing song is arguably Billie Holiday’s most influential recording,” the Library of Congress said about the recording, according to the Independent. “It brought the topic of lynching to the commercial record-buying public.”