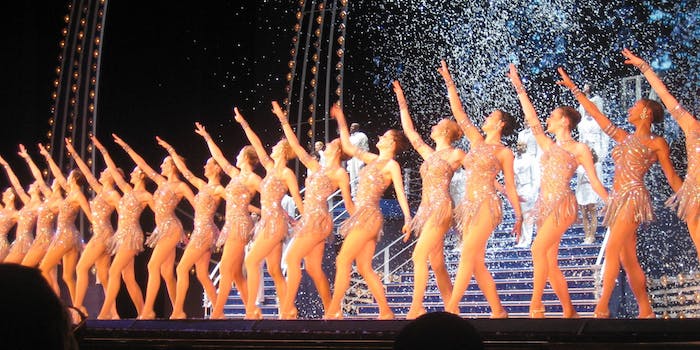 'If you are full time, you are obligated.'

President-elect Donald Trump has had a notoriously hard time finding performers for his inauguration, as many artists have vocally opposed his administration and want nothing to do with him. He seems a wee bit miffed about it, but yesterday it was announced that New York City’s glitziest tourist attraction, the Rockettes, would be on the bill. The choice seemed fitting—a group of extremely talented women who are reduced by many to their leg lengths. But according to some, the Rockettes don’t even want to do it either.

Writer and artist Amanda Duarte wrote on her Facebook page that the Rockettes are being forced to perform at the threat of their union, American Guild of Variety Artists, who have said they’ll lose their jobs if they don’t accept the gig.

An anonymous letter from a former Rockette backs Duarte’s notion that most Rockettes do not want to perform. It also includes contact information for the producers.

The Daily Dot has reached out to AGVA about the performance, but as of publishing has not received a response. However, Broadway World has reportedly confirmed that the Rockettes have been threatened after speaking out.

“We have received an email from a Rockette expressing concern about getting ‘involved in a dangerous political climate’ but I must remind you that you are all employees, and as a company, [MSG Sports & Entertainment, LLC owner James Dolan] obviously wants the Rockettes to be represented at our country’s Presidential inauguration, as they were in 2001 & 2005,” according to an email sent from AGVA obtained by the showbiz site. “Any talk of boycotting this event is invalid, I’m afraid.”

The email later reads, “If you are not full time, you do not have to sign up to do this work. If you are full time, you are obligated. Doing the best performance to reflect an American Institution which has been here for over 90 years is your job. I hope this pulls into focus the bottom line on this work.”

According to the American Bar Association, “courts do not require specific performance of personal service contracts, for this raises 13th Amendment concerns, as well as problems of court supervision.” They can’t force the Rockettes to perform. However, according to law blog Law and the Multiverse, they might be able to fire them, depending on their contract.

Other performers have noted that, while the Rockettes can choose whether or not to perform, that choice is slightly forced. Onstage Blog notes that declining to perform “would be logged as a ‘declined to accept’ which will certainly be documented and remembered the next time jobs become available or auditions are held… MSG Sports & Entertainment, LLC and AGVA aren’t the mafia but it would be moronic to think that word about a certain dancer’s willingness to perform doesn’t spread quickly in industry circles in one city.”