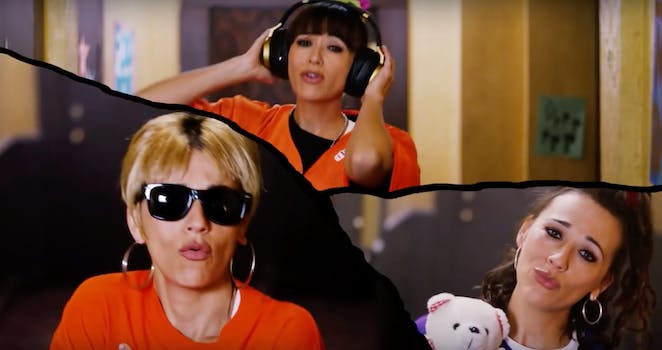 'I want to flip and rewind!'

The ’90s ended 16 years ago, but Rashida Jones is among the most nostalgic of us keeping the decade alive, and she might be the best at it.

In her new music video “Flip and Rewind,” co-directed by Jones and Will McCormack, she pays homage to the decade’s hip-hop-styled fashion, popular dance moves, and, of course, ’90s R&B.

The nostalgia starts with a video chat between Jones and Jermaine Dupri, the producer behind some of the decade’s greatest hits. “I just can’t believe it’s not the ’90s anymore,” she tells him. “All I want to do is go back.”

In a flashback, Jones channels some of the best ’90s R&B and hip-hop videos, including TLC‘s “Baby-Baby-Baby,” Mary J. Blige‘s “Real Love,” and Aaliyah‘s “Age Ain’t Nothing But a Number.” She captures the style, too: hoop earrings, sunglasses, bandanas, baggy clothes, ponytails, and cropped turtlenecks.

TGIF!! Celebrate by going back with me to the 90's. #flipandrewindhttps://t.co/UsxQqWA56c pic.twitter.com/CnF1MabfWI

Jones teamed up with her producer nephew Sunny Levine, a.k.a. Boss Selection, for the new song featured on his album Volume 1 (With Sunny Levine), which was released on Dec. 7.

However, it’s the music video’s flashback to the ’90s that will have anyone who experienced their party years or grew up during this decade wanting to “flip and rewind.”