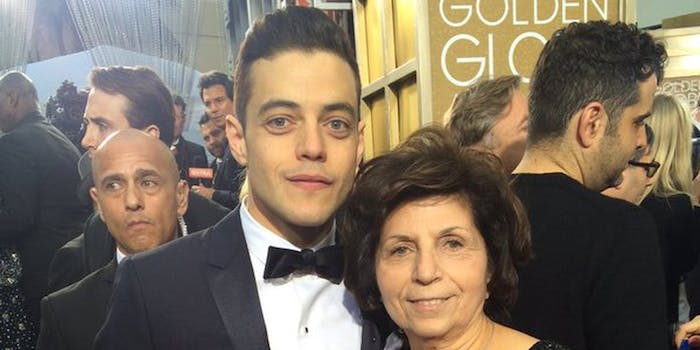 Mr. Robot star and up-and-coming hunk Rami Malek tweeted a photo from a red carpet on Wednesday in which he thanked the teleprompter technician for spelling his name phonetically.

The reason? Instead of leaving anything to chance, the phonetic spelling guaranteed that the host would pronounce the actor’s name correctly on the first try.

While Malek’s tweet is all in good fun, it does raise an important point about POC actors’ names: The burden of explaining a name pronunciation is often left to the actor him- or herself, rather than the journalist conducting the interview.

In the past few years, stars like Lupita Nyong’o, David Oyelowo, and Uzo Aduba have all spent the first 15 seconds of talk-show segments doing a little routine about how to pronounce their names correctly. It’s a conversation that, say, Emma Watson or Andrew Garfield never have to have.

Uzo Aduba has a great story about her mom’s attitude toward her Nigerian name, and it seems to mirror the sentiment Malek expressed in his tweet.

My family is from Nigeria, and my full name is Uzoamaka, which means “The road is good.” Quick lesson: My tribe is Igbo, and you name your kid something that tells your history and hopefully predicts your future. So anyway, in grade school, because my last name started with an A, I was the first in roll call, and nobody ever knew how to pronounce it. So I went home and asked my mother if I could be called Zoe. I remember she was cooking, and in her Nigerian accent she said, “Why?” I said, “Nobody can pronounce it.” Without missing a beat, she said, “If they can learn to say Tchaikovsky and Michelangelo and Dostoyevsky, they can learn to say Uzoamaka.