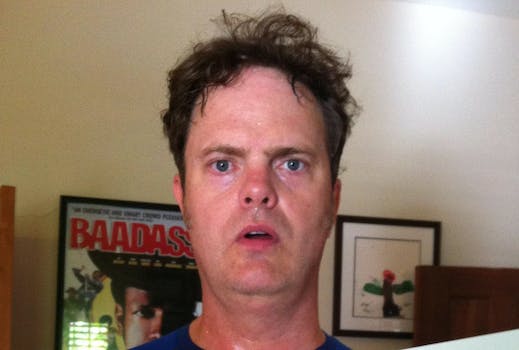 But did he perform better than Zach Braff?

Rainn Wilson, who plays the contentious, martial arts-loving beet farmer Dwight Schrute on the American version of the Office, came to Reddit’s Ask Me Anything subreddit Monday afternoon.

Celebrities and Reddit newbies are usually a little skittish and mistake-prone on their first foray into the social news site. Not so for Wilson. He was immediately proactive, almost antagonistic. After an hour he announced “I’d like some more interesting questions, please.” At one point he asked, not in response to any question, “How am I doing compared to Obama and Zach Braff?”

While he mostly was earnest about his role on The Office and his sputtering film career (he’s well aware that people like the former more than the latter), he also opened up, briefly, about his Bahá’í Faith, plus why he looks so good in an eye patch.

Out of the many cast members on The Office, who do you think you’re most likely to keep in touch with after the show is over? (houseofbacon)

I truly love the whole cast. I suppose I’ll stay bestest friends with Angela and Jenna. Oscar just had a baby girl! Named August. I’m going to kidnap her and sell her in Venezuela. I still see and talk to Steve occasionally too.

How do you feel about “the Office” post-Steve Carell? (jlomann)

I think some mistakes were made in the Office last season creatively. That being said I think some of the best, most interesting and funniest stuff we’ve ever done was last season. The Talahassee stuff was pretty sublime I thought. The Episode when I had an appendectamy was brilliant.

Paul Lieberstein (Toby) had been running the show the two seasons before Steve left and was doing a great job. There was something about the energy of the ensemble that was off. James Spader is one of the greatest actors known to man but the chemistry with him and Ed running the office was a bit dark and needed to be brighter and more energized. IMHO.

Do you ever worry about being typecast? If so, do you plan on taking roles that go against that type in the future? (MeVersusShark)

I will always be known for Dwight and I’m fine with that. I’m so fucking grateful for the role! I have always been an actor and i’ll just keep acting and people will see my range BUT they’ll still say “hey, there’s Dwight from The Office!”

What do you believe are the reasons for The Office having lower ratings this season? (As indicated by your co-star Jenna Fischer) (CobraCommanderp)

Most all TV shows have lower ratings this season. Also NBC didn’t promote us one bit.

I loved your movie Super, do you have a plan to make more movies like this? (Erbrah)

Most of my movies have bombed. People have loved Super and The Rocker after the fact but not enough to go pay money for them when they were at the theatre.

If I may, what led you to the Baha’i faith? (HerrZeleid)

I grew up a Baha’i. Most of my family is Baha’i. I know it has a weird name but it is a beautiful religion. I left it for a LONG time but have come back. My Faith is very important to me and gives me purpose and connection.

What do you think about the English version of the Office? (AllahHumpedMyPoodle)

I fucking love the english office. Some of the greatest TV OF ALL TIME.