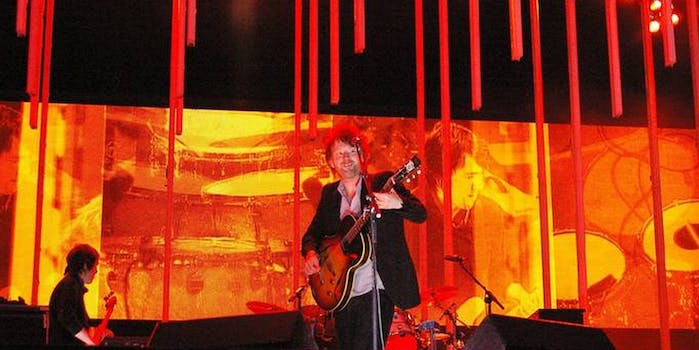 The life-giving and gorgeous A Moon Shaped Pool landed on Tidal, iTunes, and Apple Music. It instantly drew noise from social media.

The five-piece would divert from straightforward rock sensibilities—diving headlong into mixtures of Autechre-influenced electronics, jazz, and classical—with Kid A and its kid brother, Amnesiac. 2007’s In Rainbows featured a return to smoother textures. The King of Limbs, an angular and loopy mutiny of sounds, gained mixed reactions upon its 2011 release.

Leading to the announcement of LP No. 9, Radiohead dumped all of the band’s Internet presence recently, setting pretext and anticipation for an imminent release. There was a somewhat-disturbing claymation video and a song for “Burn the Witch.” The Paul Thomas Anderson-directed visual for “Daydreaming” came next.

A Moon Shaped Pool is a project largely comprised of songs the band has been kicking around for years live, here given a spa treatment by famed mixer and longtime collaborator Nigel Godrich.

The London Contemporary Orchestra-accompanied “Burn the Witch, “ first played onstage 10 years ago, provides one of the Radiohead’s trademarks—a string-driven, forever-advancing brood, tethered to Yorke’s towering vocals. However—as with most Radiohead bombast—there’s head-nod bounce underneath, as underpinning to the flightier elements. The piano-led “Daydreaming” has Yorke floating through a stringing haze, settling into an inevitable despair.

Exactly where you’d expect the band to lean into a full-tilt rock (or electronic) affair, they double down on the meditation. The slow-burning “Deck Dark” actually starts with the full chorus, then goes into the verse as it boils into a bluesy, spaced-out groove.

But, just in time, the boys raise the angst and anguish levels. Says a blaming Yorke: “You really messed up everything,” as he delivers on the album’s best track “Ful Stop.” It’s a fully textured Krautrock stalker, featuring second drummer Clive Deamer of Portishead for additional structure.

The classical and psyche-jazz thunderstorm “Tinker Tailor Soldier Sailor Rich Man Poor Man Beggar Man Thief” breathes and rumbles sounds into all discernible aural dimensions and directions. Closing strong as usual, and sure to please hardcore fans with its presence, “True Love Waits” is reimagined as an arresting, swan-graceful ultimatum from Yorke. It’s a song the band has performed since 1995, featuring biting lyrics like “I’ll drown my beliefs to have your babies… just don’t leave.”

A Moon Shaped Pool is a mostly beautiful album, intensely intricate and full. There’s a wistfulness, and particular sonic familiarity in its whole, while leaving room for additional experimentation. (Check the bossa nova and folk tones on “Present Tense.”) The only nostalgic qualities missing are the hard-charging, guttural efforts found on favorites like “Electioneering” from OK Computer, or “2+2=5” from Hail to the Thief.

The anticipation and accompanying flourish of A Moon Shaped Pool is signal and sign that a band can maintain release revelry based solely on the assumption of inherent greatness. At a handful of listens in the few hours since its release, it’s too early to affix Pool’s notch alongside or between any two album in Radiohead’s indomitable and still-listenable catalog. However, as it stands today, it should finish among the year’s best.