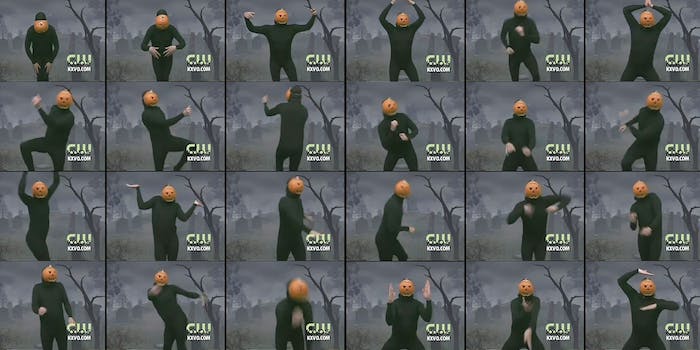 How an awkward, dancing pumpkin captured the Internet’s imagination

'It’s almost like I’m channeling some kind of a weird pansexual ballet.'

When Matt Geiler worked as a news anchor at Omaha, Nebraska’s CW affiliate KXVO, he couldn’t have predicted that he’d become an Internet legend.

Geiler had only been at the station two months when he was asked to fill some time on the 10 o’clock evening newscast. He says there was a constant lack of resources and time at KXVO; they had to fill 22 minutes every night and often had to come up with “Band-Aid solutions” on the fly. One of these moments happened in 2006, when they were prepping Halloween content for the week.

“[T]here were these holes in the show,” Geiler said. “So I’m like, ‘I’m going to run up to this place and get a unitard, and in the meantime, throw up a graphic of a graveyard on the green screen and I’ll dance around to Ghostbusters for like two minutes. Is that OK?’”

“Throw up a graphic of a graveyard on the green screen and I’ll dance around to Ghostbusters for like two minutes. Is that OK?”

Taylor Stein had been working at the station for about four years at that point, but he took over as producer on the 10 o’clock news in 2006. The station wanted an edgier, younger, “alternative” 10 o’clock newscast, which Stein says was initially a disaster. The show had a series of rotating hosts (the guy who hosted before Geiler was former MTV VJ Brian McFayden), but when Geiler came on, the four-person team solidified. They were “this crazy ensemble, trying to put the show on,” Stein said—sketch comedy meets Talk Soup.

Geiler had come out of Second City, and he and Stein were on the same page about wanting to push the boundaries of comedy—at least as far as one could on a local news show. The week of Halloween, Geiler had been filling holes by dressing as a grandma, offering advice about poisoning relatives, and starring in a murder mystery he describes as a “low-budget Clue.”

He’d previously bounced around the idea of having a character on the show called Happy Jack the Grave Dancer, who, in his head, looked like Oz character Jack Pumpkinhead. But the costume shop down the street sold no such costume. Pressed for time, Geiler had to swipe a pumpkin decoration from the station lobby, cut it in half, and fashion a headband out of a hanger.

And the Pumpkin Dance was born.

“That’s why it’s so tiny and ill-fitting,” Geiler said of the mask. “And possibly why it has never been replicated.”

You’ve probably seen the Pumpkin Dance, either on your local CW affiliate or online; the clip now has more than 3 million views. The premise is as simple as Geiler described, but there’s something almost resembling folklore about the strange, magical dance.

“A sketch like the Pumpkin Dance just fit right in with the chaos of our show,” Stein explained. “People kind of came to expect, like, ‘oh my god, what are they gonna do next?’ At the time, we thought it was funny. We didn’t think it was that big of a deal.”

Geiler, who appears as a floating head in the segment after the Pumpkin Dance clip, says he’s not sure what happened to the mask. In the chaos of the show, it may have been destroyed.

When the clip came out in 2006,  the concept of a viral video was still developing, and YouTube wasn’t being used en masse just yet. People were still sharing videos on Myspace. The Pumpkin Dance was uploaded to YouTube by someone at the station, according to Geiler, but it sat at a few hundred views for years. Stein adds that several of their KXVO sketches floated around the Internet after the show was canceled in 2007; many can still be found on the show’s channel.

In October 2009, one of KXVO’s producers contacted Geiler. Some website—he thinks it was possibly BuzzFeed—had called the Pumpkin Dance the greatest Halloween video of all time, and it was getting a lot of hits. Stein was back at KXVO working a different job when the video exploded—a college friend in New York emailed to alert him that he was “all over the Internet.”

Since then, it’s circulated every October, awkwardly ushering us into the Halloween season. There were Christmas and Valentine’s Day appearances from Happy Jack as well, but they never matched the spark of the original.

Geiler pinpointed exactly why the Pumpkin Dance has persisted.

“There’s a WTF quality,” he said. “You see this thing, and—regardless of what the entertainment is of it—there’s this thing that’s happening in your mind of like, ‘Why is this?’”

“Everybody loves goofy dancing because everyone’s got a goofy dancer inside of them,” Stein surmised.

“Those moves are… who knows where they came from,” Geiler said. “It’s almost like I’m channeling some kind of a weird pansexual ballet.”

The video is also highly remixable, which has helped sustained its virality online. It’s a blank slate, really.

Shortly after the clip went viral, Geiler, who now does musical improv in L.A., got a call from America’s Got Talent, who wanted him to do the dance on the show. But he turned them down. It’s not a party trick.

The Pumpkin Dance is too pure.

Nearly a decade after the Pumpkin Dance was created, it’s made its way back into his life in unexpected ways: Geiler tried to recreate it for his 6-year-old son, at his request (“It was a disaster”), and his 12-year-old son did the Pumpkin Dance at a school talent show last year. Some of his friends had been watching a Pumpkin Dance mashup online, and his son decided to set the record straight.

The Pumpkin Dance is too pure.

Later, Geiler had to confront the kids who still didn’t believe.

“I didn’t say this, but I was like, ‘First of all, I don’t even want to be having this fight with you guys, you 13-year-olds, about whether I’m the creator of this thing that I created, which you don’t even know the original version of,” Geiler recalled. “You don’t even want to get into it with me.’”

Stein, who now works at a station in Minneapolis, reiterates that of all the sketches they did, he never thought the Pumpkin Dance would be the one to blow up. He also has some revelatory info: When he returned to KXVO for a different job years ago, he was able to salvage a piece of Internet history from a prop closet.

“I do, in fact, have the original mask.”