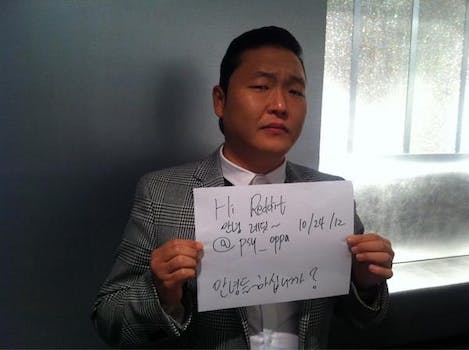 Psy didn't disappoint in his first-ever Reddit AMA (Ask Me Anything), answering redditors' questions quite candidly. Even the ones about asses.

The musician’s Ask Me Anything (AMA) thread, in which Psy answered redditors’ questions for an hour Wednesday, shot up to the top of the front page of Reddit before he even started talking.

The session got off to a late start, but Psy quickly delivered by not shying away from redditors’ sillier questions. When asked about the scene in his “Gangnam Style” music video where he appears to get mad at a girl’s behind, Psy explains he did it “because her ass was so mad.”

“This is much better than anything that was discussed on Ellen or Good Morning America,” redditor Sippin_Haterade quipped.

Perhaps that’s because a majority of the questions Good Morning America asked had nothing to do with asses. Still, Psy didn’t want Reddit to assume he yells at buttocks on the regular.

“[I]t is embarrassing to admit but this was my very first time,” he confessed.

Video parodies of “Gangnam Style” have dominated Reddit since July, and Psy let the site in on which one is his favorite: the Ohio University Marching Band’s take.

Mostly, Psy shared facts about himself per Reddit’s requests. What instruments can he play? Clarinet and drums. Where’d he get that moniker? It’s short for “psycho.” If he could meet any celebrity, who would it be? Tom Cruise.

What’s something he wished more people knew about him? “I compose all my music myself.”

Psy hung out with Reddit for about an hour before leaving to finish working on his latest record. He’s under a lot of pressure, considering that he has to follow up a hit that’s been stuck in the heads of redditors all over the world for months.

“Did you just sit down and say to yourself, ‘I’m going to make the catchiest fucking song of all time?’” dckunited asked.

“I thought so,” Psy replied, “But only for Korea.”