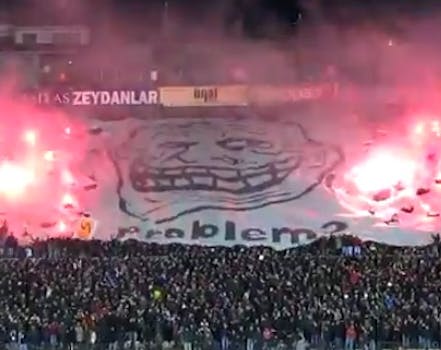 The video of this meme-inspired protested has been viewed 1.2 million times.

Is anything purely an Internet thing any more?

The troll face, an image originally used by redditors and 4chan forum users, is no longer an Internet meme confined to the Web. Or even to English-speaking countries.

Turkish soccer fans, upset over a recent ban on torch lights during games, responded with a little mischief in the form of a Web meme at a recent game: a giant banner emblazoned with a troll face and the word “Problem?” written in English.

The pranksters also cut holes in the banner, which were then filled with lit flares. Yahoo likened their attempts to a “flaming Swiss cheese.”

The banner did not catch on fire in actuality, and no one was injured.

“[That] was probably exactly their point… ‘See we even burn flares with a sheet draped over us. Problem?,’” wrote NoLogo in a related forum.  (A Turkish blog post made by the protesters and poorly translated by Google also addressed this concern.)

Uploaded on March 12, the video of the mini-Turkish rebellion has been viewed 1.2 million times to date and turned into a series of popular GIFs.

Alternative angles of the troll-face incident include one video shot from underneath the banner. Additional videos of the banner clearly display some of the law-breakers faces, prompting YouTubers to express concern that law enforcement could use the videos to identify the individuals.

But most just shared in the excitement.

“[T]his is the most epic thing i’ve ever seen!!!!!,” wrote YouTuber kilefile.