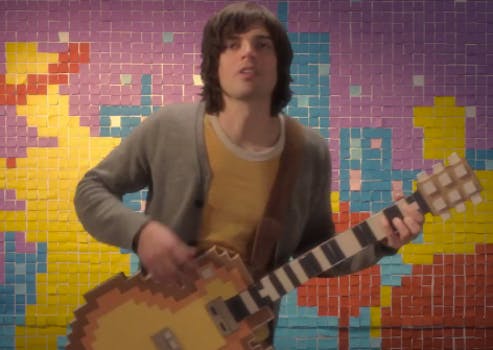 This homemade video from the Family Bones has even earned kudos from OK Go.

What’s it take to make a smash hit music video these days? Four months, a shoestring budget, and more than 25,000 Post-It notes.

That’s the math behind the new latest from Los Angeles indie pop collective the Family Bones, “If You Ever Need Someone,” a three-and-a-half minute stop-motion video that uses 11 boxes of Post-It notes to tell the story of a man’s unfettered devotion to his girl.

Released Sunday on YouTube, the video has racked up over 50,000 views and earned the admiration of many fans, including longtime Family Bones friends OK Go, a band considered by many to be pioneers in the art of DIY music videos.

“We used a green screen for the live action elements and utilized a few loops and split screens to make [the video] possible without a label or budget,” the band wrote on the video’s YouTube page description.

“All of the post its you see are real and were put up by hand. We really cannot thank all of the people listed above for donating their time, resources, and talents to help us realize our visions. I know you’re exhausted. I hope we did right by you.”

Judging by the fan’s reaction to the video, those contributions helped make ‘If You Ever Need Someone” one of the most celebrated music videos of 2012.

“LOVE IT!!!” wehoscotty123 wrote. “A beautiful song accompanied by an artful video! Can’t wait to see what’s coming next!!! You’ve got a new fan!!!”

“You guys did really well on this video,” HiKevinAllen added. “All the hard work, effort and creativity is beautiful.”

The band’s been grateful for the support, but according to bandleader Justin Webb, they’ve already got their eyes fixed on the next project.

“[Director] Aaron [Kaminar] and I have another idea cooking,” he wrote. “Not post-its this time. We want to make it as soon as we can scratch up the dough.”